(Updated: This article is part of the "Definitive Guide To Windows 10 Servicing" blog series and has been updated last in Sept. 2018.)

As you begin to move your organization to Windows 10, one of the most important considerations you will have to decide on is your Windows 10 Servicing strategy, e.g., if you adopt every released feature update or if your will skip every other one and which users will be put on what servicing option. However, the Windows 10 Servicing concept and terminology can be confusing. There is the Windows Insider Preview, the Semi-Annual Channel, and then the Long-Term Service Channel. You might ask yourself:

This article gives you a rudimentary understanding of the concept and serves as a basis for investigating the Windows 10 Servicing timeline, deployment mechanisms, and other topics related to Windows-as-a-Service.

What Is Windows Servicing?

The concept of “Servicing” (formerly known as "Branching" or "Branch Management" for years until Microsoft updated its terminology) is a term used by Microsoft to refer to the continuous update management of Windows-as-a-Service. While these terms were first coined in August 2015 with the release of Windows 10, the concept itself goes back many years and represents the way that Microsoft has traditionally written and serviced Windows.

The term "Windows 10 Servicing" in particular is used to describe how Microsoft issues a new Windows 10 release from a particular branch of the Windows code every 6 months and provides updates to each release during its lifetime. This concept still applies now with Windows 10, but it is much more visible because of the increased frequency of upgrades. Microsoft’s new model gives feature updates and new capabilities on a continual basis.

One of the most important aspects that IT administrators and IT managers have to understand about managing their Windows 10 updates is what kind of updates they will be receiving (quality vs. feature updates) and when they will receive them (Servicing Option). First and foremost, it is critical to understand the differences between a feature and a quality update:

To look up your specific version, you can refer to the TechNet article Windows 10 Version & Release Information.

As you can see from the timeline graphic below, quality updates are released monthly (shield symbol), while new feature updates are published into the Semi-Annual Channel (see explanation below) in March and September every year. The March releases will be supported for 18 months before they go end-of-life whilst the September releases will enjoy 30 months before Microsoft cuts off support. 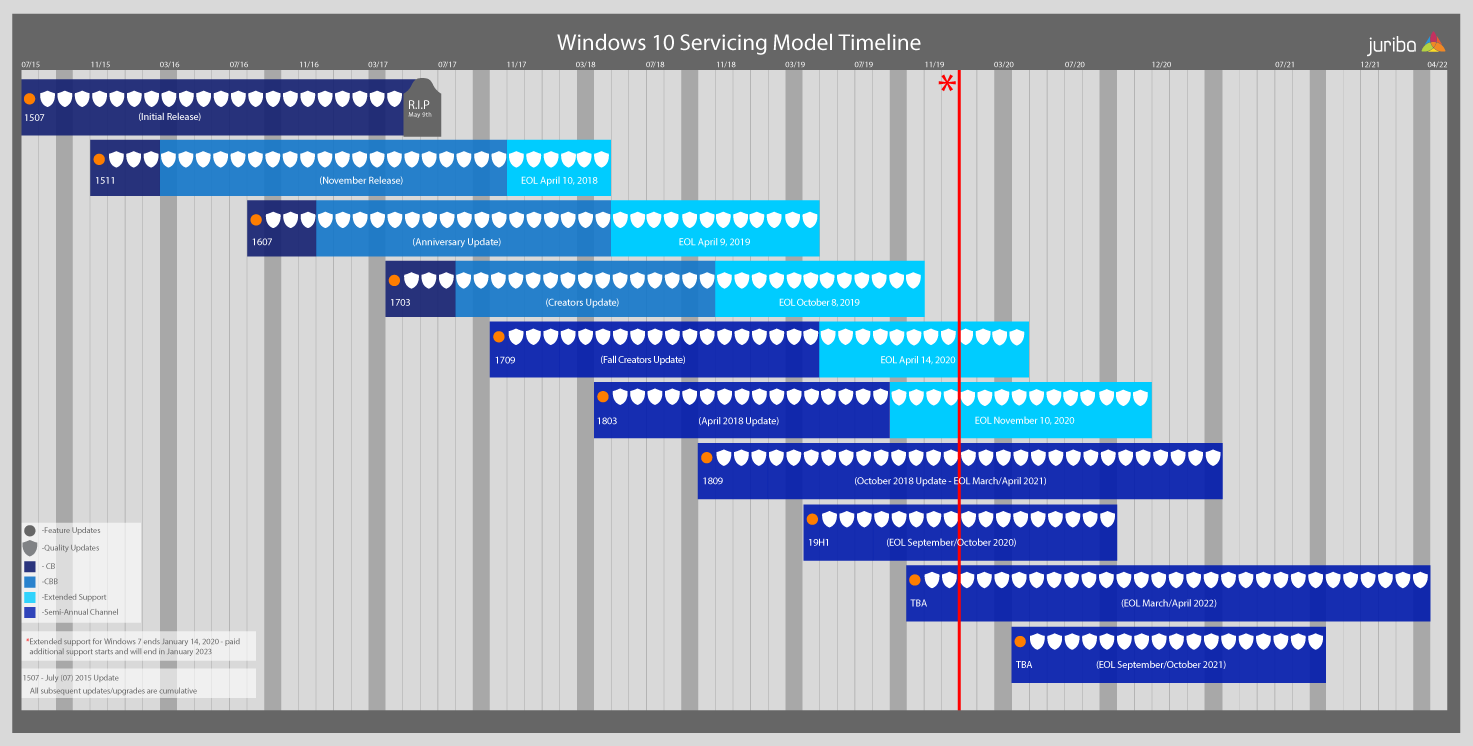 As an organization, you will want to have some control over when new feature updates are delivered to your users. This will enable you to package and test applications for the upcoming new Windows 10 version, sort out compatibility issues, and much more. This is accomplished by choosing the right Servicing option, the so-called channel.

When Microsoft first introduced its Windows 10 Branching Model, enterprises had four different branches to choose from. They differ mainly in when the feature upgrade will be available and how long it will be supported.

In spring 2017 and after much confusion, frustration, and backing-and-forthing, the former head of Windows product marketing, Michael Niehaus, announced in the Windows-as-a-Service AMA on May 4th that it would align its Windows 10 upgrade cycle to the one of Office 365 and SCCM.

Now there are three servicing options (formerly called branches) that businesses deploying Windows 10 can choose from. You should choose the option that best fits your needs:

The Windows Insider Preview Channel is open to registered Windows Insiders Program. The new Windows 10 version is released as a preview build ahead of the official release date, and it allows users to get access to upcoming improvements ahead of time to support logistical planning. Therefore, enterprise IT project managers will roll this out to only a few pre-selected, tech-savvy early adopters in IT to test-drive the preview version of the upcoming release to get a better feel for the new features and capabilities.

Who Is This For? This option is best for users that are prepared to give feedback on new capabilities and features and are willing to be a bit of a pioneer by validating Windows 10 compatibility with your current hardware and software installations. The time and effort you expend on this testing will be worth it for the advanced knowledge you gain. Examples of usage include IT testing on dedicated lab machines and IT administrators deploying upgrades on secondary computers and other devices that won’t hold up current workflow.

In the first two years after releasing the initial Windows 10 version, Microsoft has published each new version on the Current Branch first, followed by the "enterprise-ready" Current Branch for Business four months later. However, since this was sort of an artificial, from Microsoft, prescribed timeline as to when you can upgrade your broader business user base, they have changed the rules along with the new support timeline and terminology — although it still uses the same concept for Office 365.

I want to stress one point as this might be confusing: There will be NO later enterprise-ready update after the initial release has been published! Now, enterprises have to decide for themselves when they are ready for broad deployment.

Any user, e.g., your broader IT team and early adopters among your business users, that has been designated for the Semi-Annual Channel (Targeted) option in SCCM will receive the latest version as soon as it becomes generally available. This affords your team an additional pre-deployment testing period and IT teams and piloting groups find that they can use this time to get a jump on validating compatibility with critical applications as well as how to best take advantage of the latest features.

Once that internal pilot phase is completed, you are ready to move into broader deployment and you can make this new version available to all of the remaining users. By staging your rollout using deployment rings, you have more time to test for hardware and application compatibility and other potential deployment issues before rolling it out to the majority of your business user base.

Enterprises who rely on specialized and mission-critical devices such as ATMs, POS equipment in a retail environment, or computer systems that control the operation of machinery in a factory that are not suitable for perpetual upgrade might wish to deploy Windows 10 LTSC. This reduces the number of non-essential changes to the devices and clients will only receive service updates for the duration of their Windows 10 deployment — up to about ten years.

The LTSC option gives your organization a stable version of Windows 10 that includes zero new features (and, therefore, nothing new for you to test and integrate). Microsoft says it will continue to support this long-term servicing option with security updates far into the future. The company provides the LTSC as a separate Windows 10 image for the enterprise, leaving out some apps, such as Windows Store and Microsoft Edge.

Windows 10 Servicing Deployment: Putting It All Together

Now that we talked about the different servicing options, you might ask yourself, how does this all fit together? To deploy Windows across your entire organization, you can first roll out the Insider Preview Channel within a small group of IT team members, before piloting your Semi-Annual Channel (Targeted) with a selective group of business users and your entire IT team. Once that is completed, you are ready for broad deployment of the Semi-Annual Channel to the rest of your users. We will discuss how to do that in more detail in future articles. 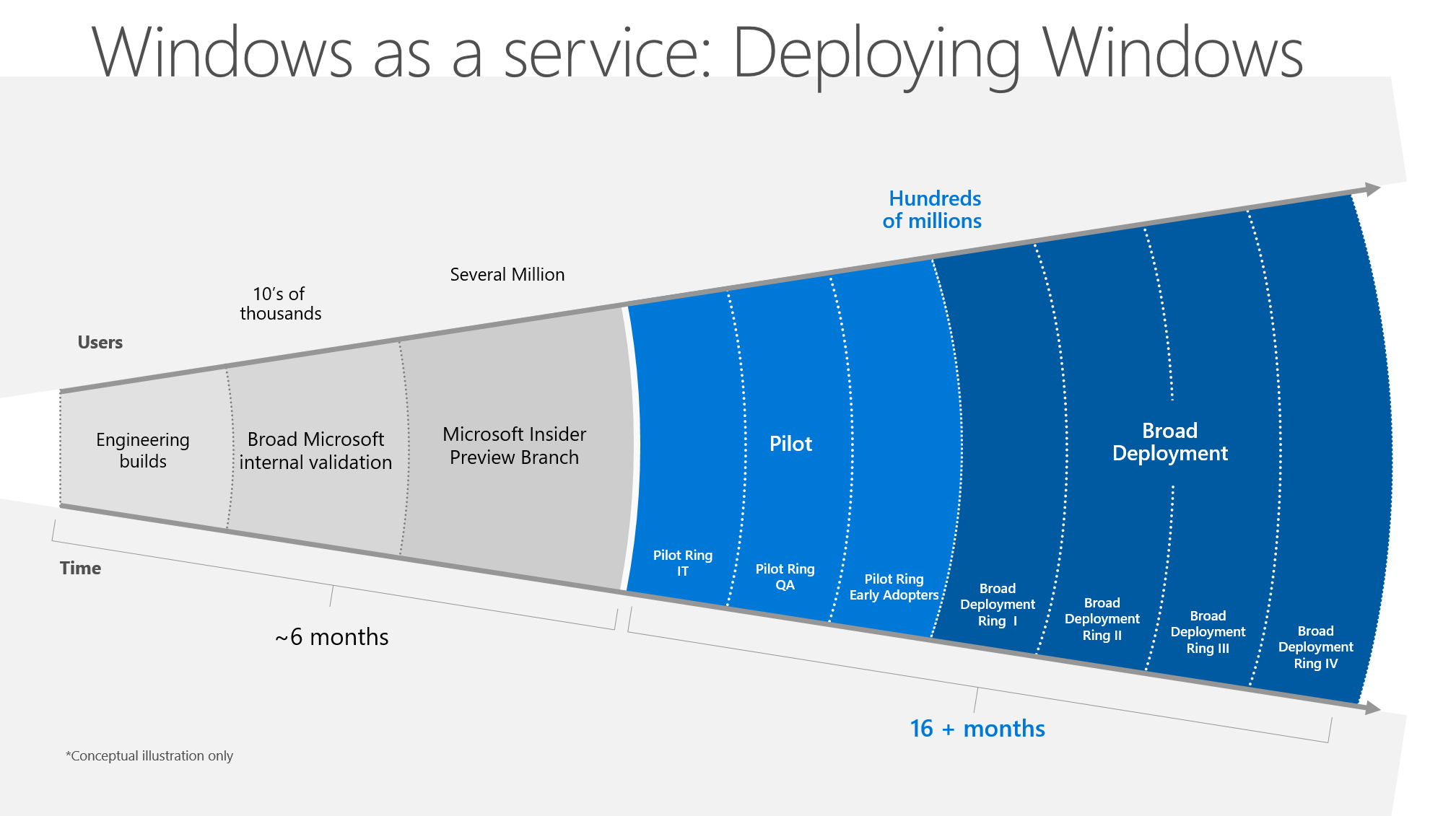 It is worth noting that you can upgrade your business to Windows 10 without choosing a particular servicing channel (in essence, you disable the option), and you can mix and match based on your particular situation. Please refer to our new blog post for more information on the Windows 10 Servicing Update and Upgrade Timeline.

The Right Windows Servicing Option Depends On Your Internal Culture

How fast you are able to roll out the latest Windows 10 Update depends on your corporate culture, your willingness to provide feedback as part of the Windows Insider Preview and your deployment strategy and tooling. More conservative industries, or verticals underlying regulatory requirements, will be more hesitant to move too quickly, while others, such as some retail and consulting firms, opt for early access to new features to gain a competitive advantage.