Windows 10 Servicing: Can I Skip An Update?

Update: Microsoft has announced in September 2018 that it will change its Windows 10 support timeline again to extend support for all currently supported version for enterprise and education customers. In addition, starting with 1809 all feature updates released in the fall will receive 30 months of support, while all spring feature updates will remain at the original 18 months.

This allows enterprises to either choose to leverage all new Windows 10 features as soon as they come out by updating on every new version or upgrade every 12 months by only adopting the fall updates. This was well received by many enterprises, and we already received a lot of feedback that many of you are planning on choosing a yearly upgrade cycle. With the new timeline, Microsoft alleviated the massive pain point described below.

(This article is part of an extensive blog series "The Definitive Guide To Windows 10 Servicing".)

Windows 10 is almost three years old, and yet only 13.9% of organizations say they have completed their migration, according to a new Adaptiva study. On the other hand, Gartner's research at the end of 2017 indicated an acceleration in adoption due to the hugely improved security features and advanced cloud capabilities. Now, every organisation that has deployed Windows 10 is facing a new challenge - how to keep the OS updated in line with Microsoft end of life support cycles.

We asked more than 430 IT project managers and executives about the hesitations and the roadblocks they are expecting with Windows 10 Servicing. Unsurprisingly, the second biggest concern was the frequency of updates (29.8%), right after the potential for business disruption (31.6%). The anxiety and apprehension about the fast velocity of change are understandable. In the past, the average Windows OS migration took 18-24 months and now Microsoft expects organizations to do a mini-version of this every six months!

Consequently, a lot of our prospects and customers are rethinking their Windows 10 Servicing strategy at the moment. Basically, they have three options:

The advice from Microsoft is to deploy every new release to every machine. But today, I want to take a closer look at these questions: "Can we skip a Windows update?" and "What are the consequences if I only roll out one feature update a year instead of two?".

What Happens If You Skip A Version?

Many organizations will try to opt for skipping one upgrade and structuring their rollout methodology around annual updates rather than running through the process twice a year. In practical terms, this would mean that if, for example, you rolled out 1703, you would skip 1709, and target 1803 for your next upgrade.

Microsoft has responded to the complaints of its customers and recently extended support by 6 months for versions 1511, 1607, 1703, and 1709 for early-adopting enterprise and educational customers. However, don't expect this to become a regular occurrence. Given the significant muscle that Microsoft is putting behind cloud and subscription-based models, I don't expect them to keep extending support on newer versions from 1803.

So what happens if you skip an update on known release dates? Let's assume a regular 18-month support window, there are no delays on the Microsoft side, and that you are following the advised Windows 10 Deployment Ring setup. Your project timeline will look as follows: 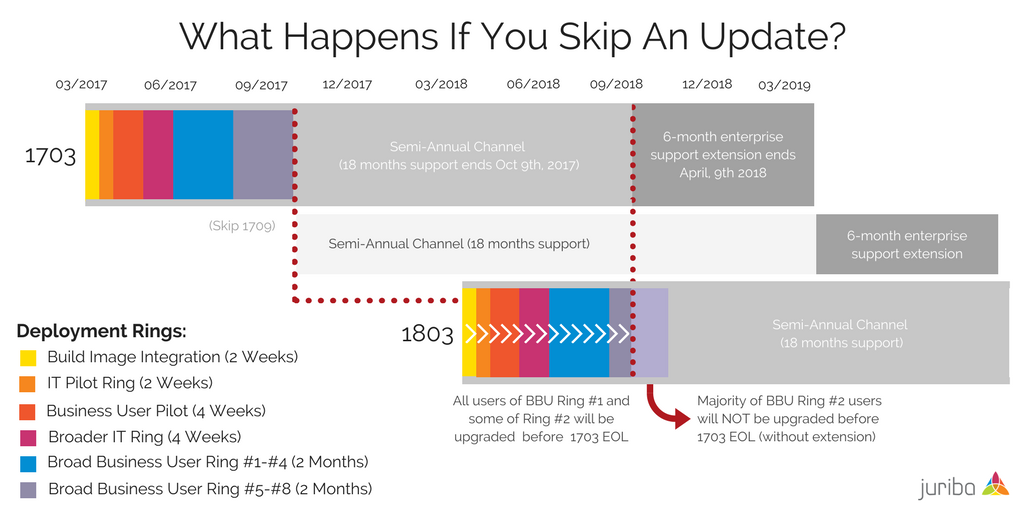 Let's assume that you will take seven months in total to test and roll out Version N (in our diagram, version 1803) across your entire organization after its general release into the SAC (Semi-Annual Channel), and this release is first available in April 2018. Remember that your current in-use version (1703) would typically have an end of life in October 2018, so you have 6 months start to finish:

Without the support extension, you will be able to upgrade all business users of the Broad Business User Ring #1 to #4 and some of the second phase (#5 to #8) before regular support for 1703 ends. However, based on our predicted timeline, the majority of your BBU Phase #2 will be upgraded AFTER 1703 has ended its 18-month support timeline (again not taking into account the 6-month extension).

In other words, unless you can deploy very fast and in volume, you could run into significant end-of-support problems for your 1803 upgrade (second upgrade cycle) given a regular 18-month support cycle. Potentially having thousands of users on an unsupported OS is a serious concern for organizations that bought into Windows 10 because of its increased security.

What Happens If Microsoft Runs Late?

Now, if this isn't scary enough, let me add another thought: What if Microsoft runs late?

Since its initial release, Windows 10 versions have seen several delays — some over a month long. For example, the Fall Creators Update (version 1709) wasn't released until mid-October and the April 2018 Update (Version 1803 or "Redstone 4") was supposed to be delivered on April 10th, 2018 but came out on April 30th after a major bug halted its availability.

Now, if you shift this timeline one month back, you are really in hot water to migrate as fast as you can. In this scenario, the second Broad Business User deployment phase would not even have started yet, and this is the model scenario assuming everything on your end goes according to plan and runs smoothly. Of course, we have now seen Microsoft move end-of-life dates back for several versions now — but moving targets are not something we should rely upon!