Understanding The Office 365 Servicing Timeline (As of May 2021)

NOTE: Since Office 365 has undergone significant changes by Microsoft in it's naming convention and update channels, we will no longer be updating this post, as we have created a new post detailing those changes, and that post will receive the updates for new releases and EOL dates.

However, this post will remain to keep a record of the historical information on Office 365.

On April 20th, 2017, Microsoft announced that it will make big changes regarding Office 365 ProPlus.

The first part of the announcement detailed new system requirements, such as the need for all Office 365 ProPlus and Office perpetual in mainstream support to be connected to Office 365 services by 2020. However, the second part of the announcement created a much bigger stir among IT professionals: Microsoft has aligned the Windows 10 release schedules and support lifecycles with those of Office 365 ProPlus because customers have "asked us to simplify the update process and to improve the coordination between Office and Windows."

In February of 2018, Microsoft also announced clarifications to the Office and Windows servicing position. The first is for users running ProPlus in a Windows 10 environment: ProPlus will not be supported on Windows 10 Semi-Annual Channel versions that are no longer being serviced. The second clarification, effective January 14, 2020, is that ProPlus will not be supported on the following versions of Windows: Windows 8.1 and older, Windows Server 2016 and older, and any Windows 10 LTSC release.

Even though your organization most likely has a subscription to Office 365 Enterprise E3 or E5, you should be familiar with the recently announced ProPlus update model. E3 and E5 include the on-premise version of the Microsoft Office Suite with the regular 10-year support agreement. However, Microsoft is making continuous updates to its Office suite — putting enterprises more and more behind the eight ball.

Since this elongated lifecycle won't be a sustainable support strategy going forward, especially for those using a combination of local installs and browser-based use, we believe these updates will eventually be carried through to other O365 versions. Therefore, you should start preparing now for what is sure to come in the next few years.

Update 2020: In April 2020, certain versions of Office 365 ProPlus are being renamed to Microsoft 365 Apps for enterprise. Please see this article and this one from Microsoft for more information on the change.

In September 2017, Microsoft implemented the following changes to the Office 365 ProPlus (from now on referred to as Office 365 only) update model:

Update: Microsoft announced on Sept. 6th, 2018 that the company is updating its Windows system requirements for Office 365 ProPlus and revising some of the announcements mentioned above. Office 365 ProPlus customers will continue to be supported on Windows 8.1 through January 2023 (end-of-support date) and on Windows Server 2016 until October 2025. In addition, Microsoft will continue to support Office 2016 connections with the Office 365 services through October 2023.

Before we dive into the support timeline and update lifecycle, let's define the basic terms and talk about the general concept of the Office 365 update model.

What is Office 365 ProPlus?

The software giant offers four enterprise plans: Office ProPlus, E1, E3, and E5. One of the more basic versions, Office 365 ProPlus focuses on the on-premise version of Microsoft's enterprise-ready productivity apps — including on-premise licenses for up to 5 devices per user for the Office Suite including Word, Excel, PowerPoint, Outlook, OneNote, Publisher, and Access.

It also includes some cloud-based services: Skype for Business and OneDrive for Business (1 TB of personal cloud storage), Office Online (Word, OneNote, PowerPoint, and Excel), and access to other Office 365 apps such as Sway (Digital Storytelling) or self-service Business Intelligence capabilities in Excel.

What Is The Office 365 Update Model Concept?

After decades of milking the on-premise Windows OS and Office productivity suite cash cows, Microsoft discovered the power of cloud computing. But for most enterprise organizations deeply rooted in on-premise, the transition to Office 365 still meant a local, on-premise installation of the Office productivity suite, with only small business and mobile device users moving fully to the cloud version of Office 365. Browsers are still limited in what they can do compared to a fully functional fat client application like Excel, so the requirement to manage an on-premise Microsoft Office upgrade cycle will be with us all for years to come.

Just like with Windows 10, there are two types of updates that all Office 365 connected devices will receive:

It is up to you to decide which servicing option is right for which user depending on how many business apps, add-ins or macros you have and how much testing you think you will need.

Generally, the Windows 10 and Office 365 ProPlus support timeline follows the same logic. Each new version is supported for 18 months after the initial release. This means that once the new version is published into the default Semi-Annual Channel, you have 14 months until it goes end-of-life.

If you have a look at the release date of the last few and future releases in more detail, the support timeline looks like this:

If you visualize these dates using the Semi Annual Channel update cycle for security and non-security update releases, you get a support timeline that looks like this: 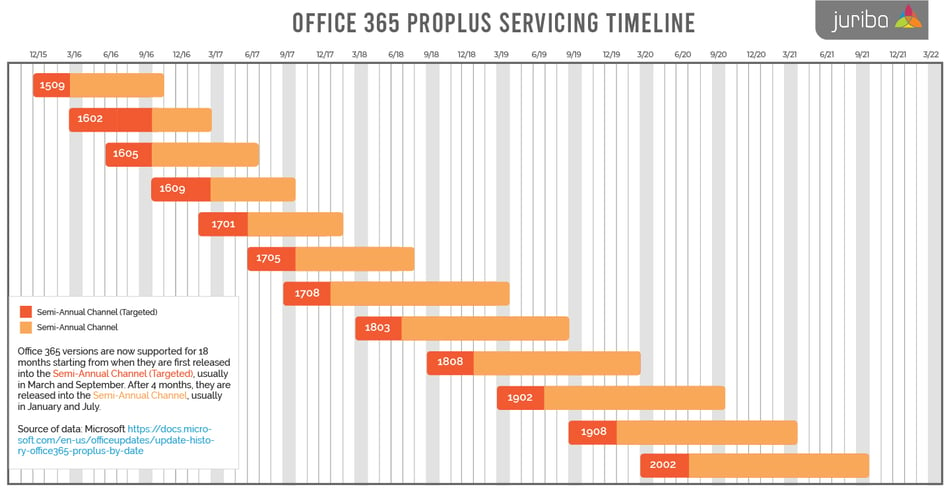 As this can be confusing sometimes, here is an example: Let's say you started your migration onto version 1908, which was released to the Semi-Annual (Targeted) Channel in September of 2019. In this phase you would migrate your early adopters, which Microsoft recommends to be 10-20% of your IT estate. During this phase your early adopters and IT teams will detect issues, conflicts, etc. and start to make fixes. They'll also send suggestions back to Microsoft for them to fix.

In January of 2020, Version 1908 is then released into the Semi-Annual Channel, for the rest of your IT estate to upgrade to. Now, version 1908 has 14 months of support left, and if your early adopters are on the (Targeted) Channel, they have two months of support left until the next version, 2002, gets released in March 2020. From this point you have a coupe of choices:

Depending on how fast your organization is able to migrate, a combination of both choices might need to be implemented, breaking your IT estate into deployment rings.

How Aligned Are The Windows 10 and Office 365 Release Schedules?

If you previously followed Microsoft's announcements or read our just-updated Windows 10 Servicing Support Timeline article, you might see some slight discrepancies here.

Let's take a look at the last few releases of Office 365 and Windows 10 to see how they line up.
Note: EOL dates for Office 365 are based on the last version released or announced date per Microsoft's update history page.

As you can see from above, the releases of Office 365 (Targeted) and Windows 10 have been within a couple of months of each other, with Windows 10 releasing late, and sometimes having the update pulled and re-released. The EOL dates of Office 365 remain constant. However, the Windows 10 EOL dates have had several revisions. The current for Windows 10 is that the Spring releases have 18 months of support, and the Fall releases have 30 months. However, there have been additional extensions due to Covid-19.

Where Are They Different?

However, Michael Niehaus, Microsoft's former Senior Product Marketing Manager for Windows, explained recently in a side comment that they will no longer tell enterprises when they should be ready for broad deployment. Therefore, the company will not re-publish an already published version of Windows 10 four months after the initial release — so there will be only one feature update, not two.

While both approaches have their individual merits, we expect to see a realignment of these philosophies. Ultimately, I can see the weight shift towards the Semi-Annual Channel as becoming the main focus point, as this is the point in time when enterprises need to kick off broad deployment. However, the clock will always start ticking when the initial feature update is released.

As you can see, moving to Office 365 comes with a slew of forced updates and a variety of management options — which is a massive departure from the traditional way IT used to handle version rollouts. Gone are the times when we could neatly package a migration into a project every four to five years. To absorb and efficiently manage this new pace of change, IT must undergo a massive culture shift to a Business-as-Usual or Evergreen IT modus operandum.

Updates have to be rolled out at a much faster pace, as your last version is getting closer to its end-of-life every month. Rather than planning for a big disruption, the successful management of Office 365 updates requires a continuous plan of action paired with an agile project management approach.

To support this new way of managing updates, you will need the right tooling that allows you to gain up-to-date, actionable insights into the readiness state and status of your assets, as well as a central command and control center. The ability to continuously improve in small iterations to keep you moving forward will be of paramount importance.

If you are planning an Office 365 rollout within the next 12 months, or have already moved and want to learn how to efficiently manage your bi-annual update cycles, schedule a consultation with me and I will walk you through how Juriba's IT Transformation platform, Dashworks, has helped ready more than five million assets for migration and enables enterprises around the world to stay in control (and ahead) of their Office 365, Windows-as-a-Service, and other Evergreen IT initiatives.