According to a Juriba survey, only 13% of respondents are in the process of starting or will start their Windows 11 migration this year, while 38% of organizations will start their move to the next Microsoft OS in 2023, and 25% will not consider migration before 2024. The remainder will first move to Windows H2/21 and then consider Windows 11.

There are many factors that influence a transformation program timeline as impactful as this one. Your device estate might need to undergo a major refresh to meet the stringent hardware requirements. Your past struggles in rolling out upgrades efficiently and fast enough might cause you to be hesitant to risk a jump to Windows 11 just yet. Or perhaps you have to coordinate with larger Modern Workplace / EUC initiatives.

Whatever the reasons are, one of the biggest reasons why you would move is the return on investment on the productivity and security features you receive when upgrading. In other words, how do you get a bigger bang for your buck: staying on Windows 10 longer in the hope that Microsoft will offer three (3) years of Extended Security Updates (ESU) as they did for Windows 7, or moving to Windows 11 as quickly as possible?

To answer that question, I will compare in this blog post the just-released fall updates of Windows 10 versus Windows 11 (Windows 11 22H2) as they are a great indication of Microsoft's feature release strategy until Windows 10 goes end-of-life in 2025.

One of the key drivers for any Head of Modern Workplace or EUC Manager is cybersecurity. According to Purplesec, "Enterprises experienced 130 security breaches per year, per organization, on average." A Business Wire report revealed that attackers are targeting zero-day vulnerabilities in unpatched systems, making it absolutely crucial to keep every single device on the most recent OS possible.

Increased security is at the core of Windows 11. Microsoft wasn't willing to compromise on that despite the pushback it received after releasing the hardware requirements for installing the initial version. Specifically, the TPM 2.0 requirement has left a lot of devices unable to make the upgrade. Even though hardware refresh is inevitable, this limitation plus possible application compatibility issues with Windows 11 (we honestly haven't seen major ones, but be sure to automatically test all your crucial apps), has caused enterprises to be slow to adopt it as their new OS.

Also, Windows 11 H2/22, which is the first major upgrade for Windows 11, focuses heavily on cybersecurity, such as protection from phishing malware and other malicious activities that open a company up to being hacked, being compromised, or some other business disruption. Of the 14 major updated sections for Windows 11 from Microsoft's website, eight (8) of them are related to security.

And while 22H2 touts new grand security features, such as Smart App Control and Windows Defender Credential Guard, not all new security features will be available for most customers. Take, for instance, Pluton, a chip-to-cloud security processor technology, which makes it extremely hard for an attacker to gain access to credentials, personal information, and other sensitive data.

However, only two (2) chips currently support this function: AMD Ryzen 6000 and Qualcomm Snapdragon 8cx Gen 3. Even though Intel was part of the initial announcement of Pluton, their current chipset, Alder Lake, is not compatible with Pluton, making Pluton unusable on most devices. Despite this limitation, the other security features, plus accessibility enhancements and other new features, make Windows 11 22H2 an exciting upgrade possibility for business users.

After cybersecurity, two of the most important priorities for CIOs and Modern Workplace managers are user experience and productivity. And while it is tempting to stick with Windows 10 as long as possible, the amount of new features included in the most recent Windows 10 update is so small that it is delivered via the regular cumulative update. The major focus of the new version is mainly on fixes.

This won't really come as a surprise to many who have followed Microsoft's release strategy over the last 12 months. Even the last fall update of Windows 10 had very few new features. With most of Microsoft's resources being piled into Windows 11, and rumors of other possible future versions of Windows, Windows 10 will continue to remain stagnant in terms of updates between now and EOL, and especially through the ESU time, if any.

Microsoft has stated that they will continue to support at least one version of Windows 10 until 2025, which begs the question: Is THIS annual update going to be the last ever released? Will future updates only be critical fixes? Of course, it is possible that Microsoft could continue to release one upgrade a year to fix bugs and known vulnerabilities for two more years (remember, nothing has been announced), but regardless of this possibility, you shouldn't expect much in terms of productivity and experience.

While this might be good news for the IT pros responsible for maintaining devices with app packaging and deployment, it also means missing out on new features that come with Windows 11, which can lead to employees having a more modern device at home. The gains from new features, such as efficiency, compatibility, and easier collaboration with teammates, especially remote and in-the-field workers, can offset the initial app compatibility and deployment issues that might arise.

Except for the additional hardware refresh component, moving from Windows 10 to Windows 11 shouldn't be much different from migrating to another version of Windows 10, especially if you have managed your previous upgrades as Business-as-Usual or in a somewhat Evergreen IT fashion. If you haven't already, consider doing our Windows 11 Assessment Service. Within just a few days, you can get answers to questions (e.g., How many and which devices do I need to replace? Which can be migrated as an in-place upgrade?) and experience how easy, fast, and simple automated deployment wave planning based on application coverage and hardware compatibility could be for you! 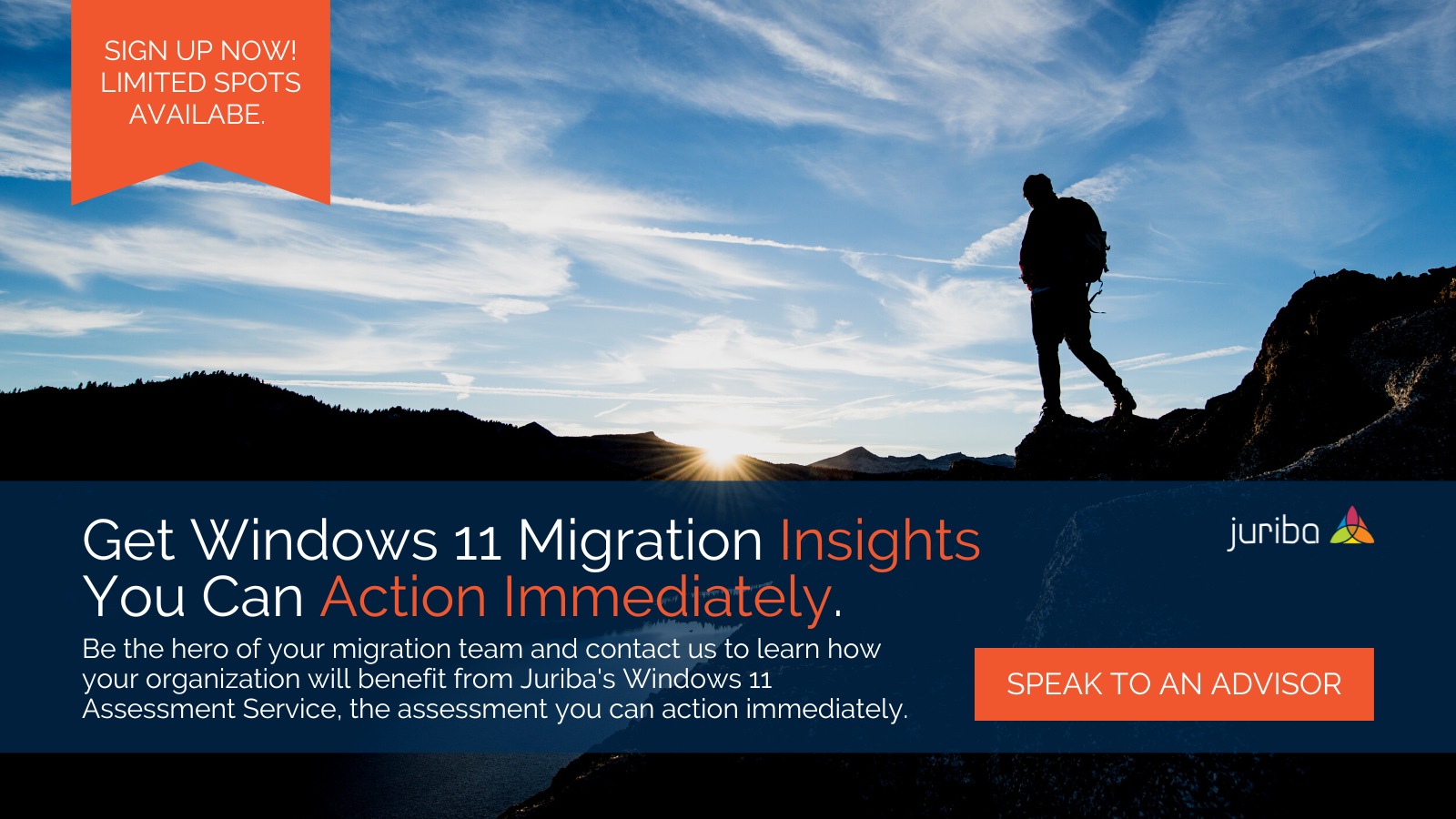