In November 2015, I calculated the per device cost to migrate from Windows 7 to Windows 10 — a whopping $693 per seat for a manually delivered migration using spreadsheets or hand-cranked databases!  In comparison, Gartner had quoted somewhere between $1,035 and $1,930 per user depending on the level of desktop management in place, and Forrester estimated $1,000 as the average expense.

With Juriba Dashworks software, we were able to reduce this figure significantly (on average to $493 per seat). While our Win 7 to Win 10 calculation was based on a hypothetical 10,000 seat migration project, it was built from real-world experience of having helped enterprises ready millions of devices for migration.

As companies move to continuous upgrades rather than big bang migrations, the focus of these calculations shifts as well. This week, Gartner has been first to market with a new cost model, the so-called "Windows 10 Feature Update Cost Model", which is available for purchase for $7,500 on the analyst company's website and consists of an Excel spreadsheet and an accompanying report. It outlines how the ongoing maintenance cost compares with the big bang migrations of the past. The goal is to allow large organizations to estimate the costs and labor requirements involved for managing one or two Windows 10 Servicing cycles a year.

Update Sept. 2018: Microsoft has updated its Windows 10 Servicing support model. All currently supported Windows 10 Enterprise and Education editions (versions 1607, 1703, 1709, and 1803) receive 30 months of total support. Starting with 1809, all Fall Feature Updates will be supported for 30 months, while all Spring Feature Updates will continue on an 18-month support schedule. Effectively, Microsoft has relented to customers' and analysts' pleas and now "allows" enterprises to switch to a 12- or even 24-month deployment cycle.

[Want more? This article is part of the Definitive Guide To Windows 10 Servicing blog series.]

In a ComputerWorld article, Gregg Keizer quotes Gartner to explain how organizations must rethink their upgrade processes as well as their budget and resource allocations accordingly:

Organizations must move from running infrequent projects to upgrade Windows every six to eight years to having a continuous process to qualify and push out updates every six to 12 months, This results in a different pattern for staffing and budgeting. Tasks that used to be done in a separately funded project - possibly with help from a service provider - become a task that must be done continuously, probably by existing IT staff."

To visualize the impact of such a drastic change, Gartner's report includes 2 sample calculations of a hypothetical 2,500-person firm:

How 6 Annual Upgrades Compare To A Big Bang Migration

According to the report, while there is a significant difference in cost between unmanaged and managed environments, there is only a slight difference in the cost of going through a yearly upgrade cycle compared to a large big-bang migration project every six years. For those not familiar with the Windows 10 servicing cycle, this strategy is often referred to as 'skipping a release'.

But Costs Almost Double With Two Updates A Year!

Things seem to drastically change if organizations choose to follow Microsoft's advice and upgrade twice a year when the new feature updates are released (i.e,, 12 upgrades over the 6 year period): 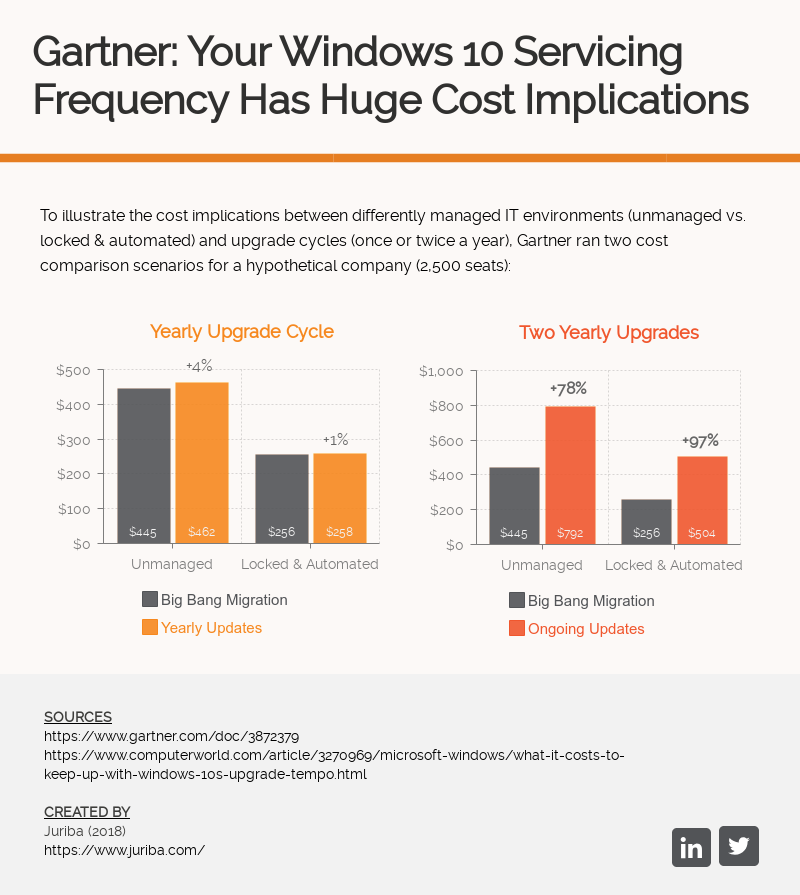 It is also worth pointing out that while IT used to carry most of the migration cost, users now have to shoulder a lot of the responsibilities and costs for testing applications as part of the new user piloting process for testing updates.

A few months ago, we speculated if Microsoft was going to give in to the cries of customers and analyst houses like Gartner, who has been lobbying for a while that Microsoft should allow customers more time (24 months) while reducing the number of updates to one feature update a year. In fact, many organizations are already skipping every other update. But while Microsoft has extended its support by an additional 6 months for previous versions, it recently stood firm that version 1803 will retire Nov. 12, 2019 — after only 18 months.

In the near future, we will be releasing our own, proprietary cost modeling tool (free of charge) based on 6 million migrations we have helped our clients facilitate. We strongly believe that, through automation and an iterative improvement cycle, the costs can be kept to a minimum and the productivity and security benefits gained by a faster upgrade cycle outweigh the added costs.

At Juriba and within most of our large customers, there has been growing recognition that Windows 10 Servicing management is something that will need dedicated resources, tooling, and processes to manage.

Gartner's cost model for ongoing Windows 10 management is the first time that we have seen external analysis that these Windows 10 upgrades are going to require significant budget. If we take a large enterprise and extrapolate out these results for a locked environment (in reality there would be some economies of scale), an annual budget to manage two upgrades per year would require an annual budget of $840,000.  That is a significant amount of money for organizations to find, especially if they had not realized that this would even be an issue for them.

Until this point, many organizations have simply believed that this will be a Business-as-Usual (BAU) activity, swallowed by our existing IT teams. Gartner has effectively dispelled that myth with their model, and validated the fact that Windows 10 to Windows 10 feature release upgrades will have a significant impact on the organization. Now, more than ever, the right tooling will be essential in keeping these costs to a minimum, and we would strongly advise that you take a look at our Dashworks product to help prepare for maintaining Windows 10 in an Evergreen cycle.