How We Mathematically Calculate Deployment Rings For Maximum Velocity

A few years back, a tech consultant won a few eBay auctions he was bidding on and found himself the owner of 2 tons of LEGO pieces overnight. He developed and built a GPU-based neural network to first pick out damaged and dirty pieces and then identify and sort the remaining pieces.

Sometimes, this situation reminds me of an estate before a Windows 10 upgrade. Each application is like a lego brick. Some are the same, some slightly different, some uncompliant and not wanted and some you want to group together and keep. In order to sort out the mess, you need to normalize, rationalize, and categorize all of your applications before you are able to group your users into the correct deployment rings. If you have hundreds of thousands of seats, this must happen at maximum velocity (in other words, based on the most efficient mathematical algorithm) in order to keep pace.

Today, I want to walk you through the logic behind the Juriba Dashworks algorithm that we have implemented in our Evergreen IT and IT Transformation Management tool to allow our customers to do exactly that. And while I have to admit that it probably would be more fun watching the LEGO sorting robot, you will be relieved and excited to see your estate sorted neatly into efficient deployment rings! 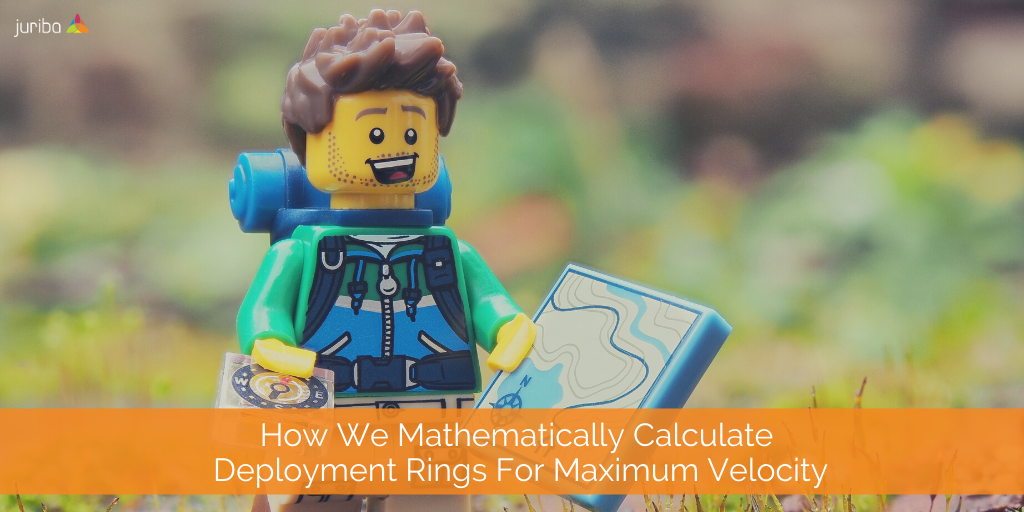 A Quick Refresher On The Windows 10 Deployment Ring Concept

Windows-as-a-Service requires ongoing and iterative maintenance in the form of monthly quality updates as well as bi-annual or yearly feature upgrades. This can lead to an organization maintaining several different versions of Windows OS.

To accelerate and streamline the upgrade process, Microsoft recommends creating internal sets of users ranging from "most adaptable and least risky" to "least adaptable or riskiest". These are sorted in four different sets (or deployment rings) for migration: preview, targeted, broad, and critical.

For a smooth, efficient migration, it is important to choose the right devices for your preview ring as well as your critical ring — for different reasons. Your critical ring consists of machines that you will migrate last as they typically run mission-critical, high-risk applications.

Your preview ring needs to include your early adopters (less than 5% of your organization) to whom you are going to deploy the new version of Windows, regardless of any application readiness. Generally, this ring includes a lot of IT people and a handful of selected business friendlies who are fairly technical. They are okay with things not working right away and know how to fix it or roll back to the previous version.

Application readiness is the largest and most important linchpin in your upgrade schedule — the faster you can sort out this problem, the more velocity your entire process will have. To do so, we will have to find the most widely used applications with the lowest risks and sort them out. Once they are compatible and pose no risk, you can move on to the next in line.

We encourage our customers to

Any 'not important' application will not factor into this equation — anything else will be considered when determining your upgrade strategy. Remember: this is a one-time effort (or at least a very infrequent task), but it is crucial for the efficiency of the entire upgrade process!

Now that you have determined your preview and critical ring candidates, as well as cleaned up and categorized your applications, you can use Dashworks to tell you which are the best devices to go into the targeted ring to give you good coverage across all of your applications. This is important because, by the time you finish deploying to the preview ring and targeted ring, all of your critical and important applications will have been deployed at least once on a device that has been migrated. This gives you confidence as you move into the broad ring (which can be up to 90% of your organization) that you have covered all of your relevant applications.

We calculate the fastest possible route by first excluding any devices that are reserved for the Critical Ring and by sorting out any applications that were successfully covered in the Preview Ring.

Our algorithm now finds the first device that has the most remaining critical and important applications installed and adds it to the the targeted ring. Then, Dashworks finds the next device with the next most remaining amount of applications on it and we add that to targeted ring. That algorithm just keeps running until all critical or important apps are covered by the devices in either the Preview or the Targeted Ring.

Below is a screenshot of our Application Ring Coverage Report showing the application coverage of the current devices based on their categorization. If we must have these six machines (out of the 5,354 total devices) in the Targeted Ring, we cover only 46% of the critical, 67% of the important, and 22% of the non-important applications.

Now, if you switch the view to the Targeted Ring (Recommended), you have 33 devices in your Targeted Ring, but you cover all critical and important applications. 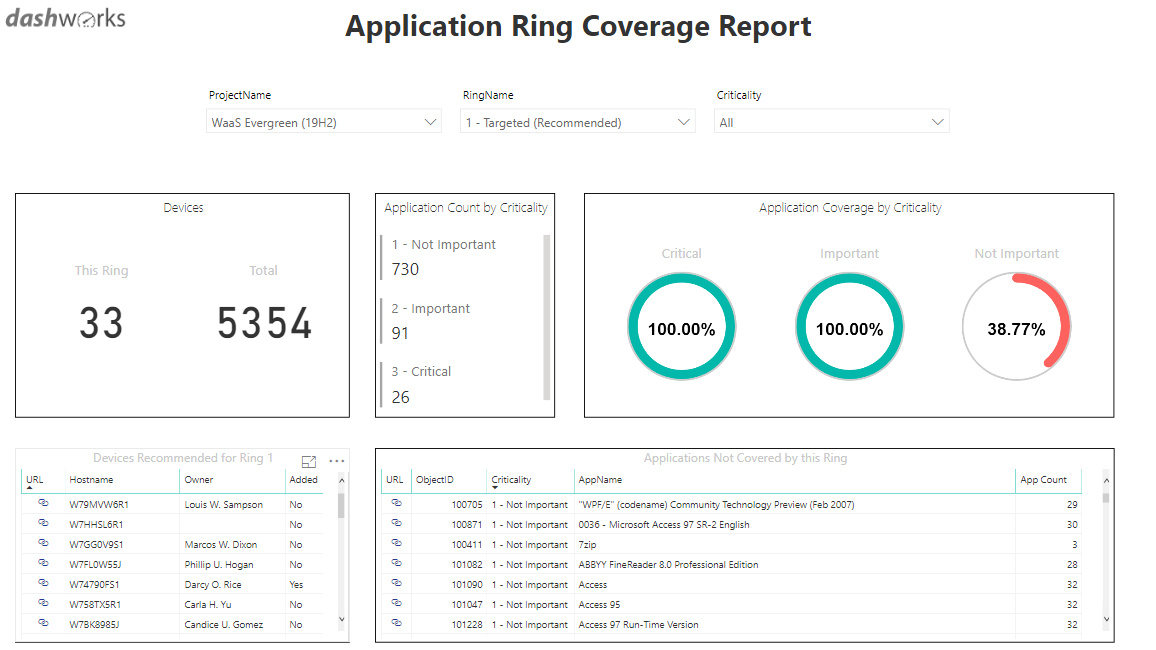 Now, some organizations will find that it is enough to have every application deployed somewhere once, while others would like to go the safer route and deploy it multiple times. In Dashworks, you can define how many devices should cover each criteria (application or hardware). This could be important as a device included in the Targeted Ring could be unavailable for an upgrade. Most organizations will want to have at least one if not two backups.

In addition, it is actionable. Each device comes with a link to its record in Dashworks, so you could manually push that device or bulk edit them to include them in a specific ring. 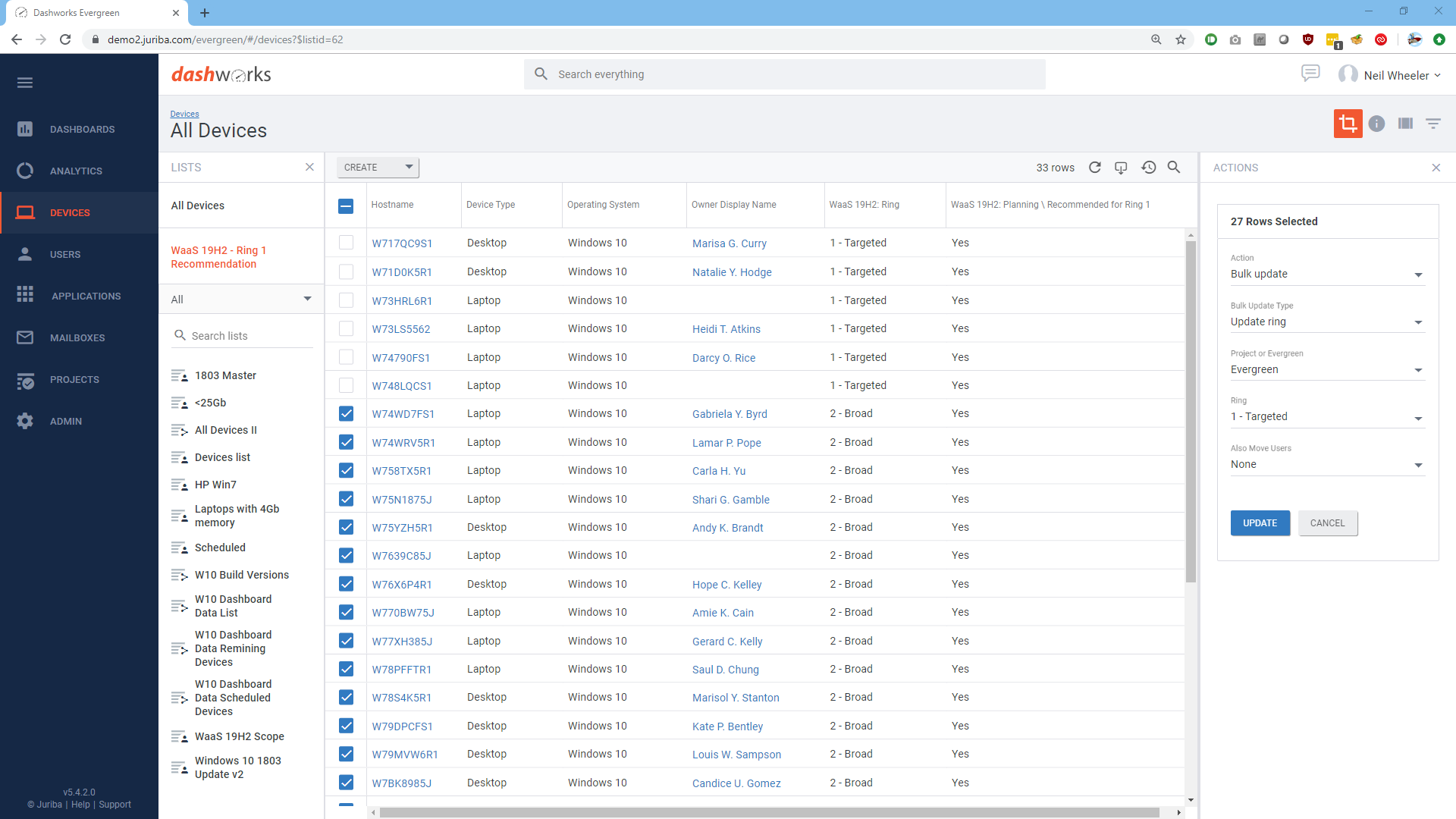 Dashworks already accelerates and streamlines Windows 10 upgrades and other Evergreen IT projects with its central command and control center, its automated communication workflows, and much more — resulting in significant time and cost savings. But the ability to target the minimum number of devices to achieve 100% critical and important application coverage (and soon hardware coverage) not only speeds up your entire deployment but also drastically boosts your confidence that your upgrade will go off without a hitch!