Microsoft Just Announced (Another!) Windows-as-a-Service Support Model Change — What Does It Mean For You?

If you, like many others, have been struggling to keep up with the constant modifications the Windows-as-a-Service support model has undergone since its initial release, you know that the Greek philosopher Heraclitus was right when he said, “Change is the only constant in life.”

Well, now there is a new change — I believe it is the fifth major update Microsoft has made to its Windows 10 Servicing model — but this one will be well received by most IT Pros.

On September 6, 2018, Jared Spataro, Corporate Vice President for Office and Windows Marketing, announced in an article entitled "Helping customers shift to a modern desktop" posted on the Microsoft 365 blog, that it will (yet again) make changes to its Windows 10 support cycles for Enterprise and Education editions.

Since February 2017, when Microsoft aligned the Windows-as-a-Service update cycle with Office 365 ProPlus, enterprises and large educational institutions that subscribed to the Semi-Annual Channel received a new Windows 10 release every 6 months (March/April and September/October) and had a short 18-month support window for each release.

This fast cadence of updates resulted in lots of customer unhappiness as they struggled to establish an efficient and fast-enough testing and rollout cycle. A vast majority of organizations ended up skipping updates or ignoring them completely which tacked on additional pressure to get everything tucked away in time. In response, Microsoft extended the support cycle for each of the initial releases, giving customers additional time to upgrade their initial Windows 10 rollouts. However, many enterprises still struggled to manage the change, citing a lack of the right people, tools, and processes to move this quickly.

Industry analyst firms (e.g., Gartner) and customers alike called upon Microsoft to switch to a yearly update release and extend its support window to at least 24 months. Now, Microsoft has reacted with last week's announcement — finding an elegant middle ground to satisfy both types of customers.

In detail, the changes are as follows:

Please note that there are no changes announced for any other feature releases of Windows 10 (e.g., Home and Pro editions) or Office 365 ProPlus (other than what is mentioned above). They will maintain their support schedule of 18 months for feature updates targeting March and September.

Initially, each Windows 10 Feature Update was supposed to be released into what was then called the Current Branch (later Semi-Annual Channel (Targeted)), and four months later declared enterprise ready and republished into the then-called Current Branch for Business (later Semi-Annual Channel (Broad)). There was no set support timeline, only that Microsoft would support no more than 2 active versions at any time. The problem was that this model didn't allow enterprises a chance to plan. For example, in 2016, Microsoft only released one update (1607) before settling on a spring and fall update cycle.

This is what the initial support model timeline looked like: 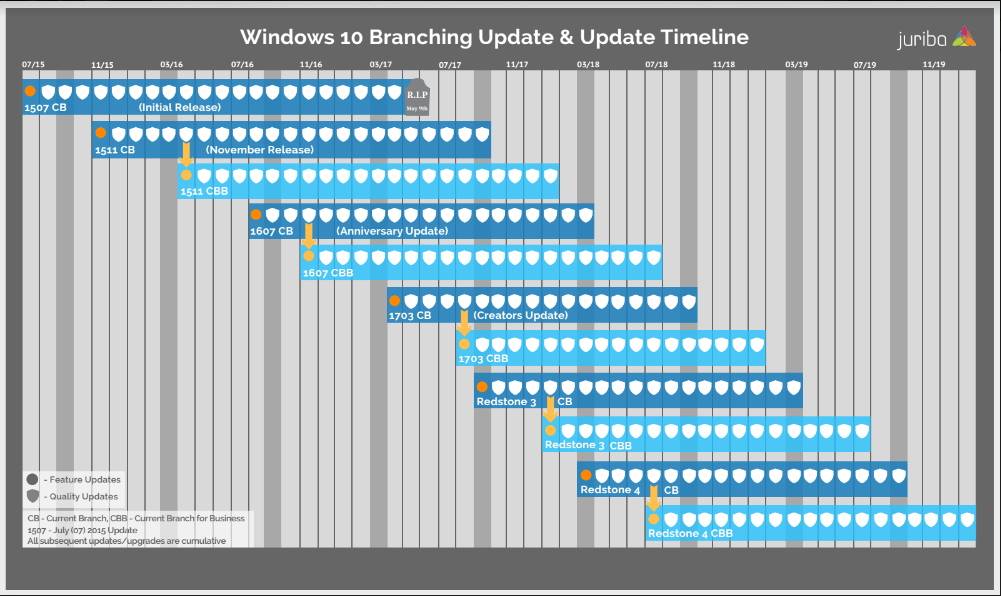 Now, Microsoft has changed its terminology (e.g., Windows Branching becomes Windows 10 Servicing) and will no longer republish a feature update as enterprise-ready. Also, until now, enterprises had 18 months from the original support date. With the new changes in effect, the new timeline will look as follows:

As you can see, there has been a LOT of changes.

Microsoft Relents On Forcing Fast Upgrade Frequency, But Leaves Option Open For Those Who Want To Upgrade Twice A Year

So, what does this all mean?

Effectively, this new support model will allow enterprises and large educational institutions to choose their upgrade speed, rather than skip a release and risk having users run on an unsupported operating system. You can now choose to update at a slower pace using longer deployment cycles to plan, test, and deploy without losing support, or you can maintain the faster semi-annual update cadence. This gives organizations five main possible upgrade scenarios:

Regardless of which strategy you choose, you will still have to keep a tight lid on your application compatibility, centralize your project management, and create a repeatable, automated process for an efficient rollout.

Microsoft Is Not Moving Away From Twice-a-Year Updates

It's easy to read the announcement and think, "Okay, now I can just upgrade once a year." I want to stress that it is my firm belief that Microsoft is NOT relenting on the twice-a-year upgrade cadence — it is just buying time until it has put all the other puzzle pieces into place!

Enough evidence for this is in the statement itself and the language used:

In desktop management, this is especially true: the process of creating standard images, deploying devices, testing updates, and providing end user support hasn’t changed much in years. It can be tedious, manual, and time consuming. We’re determined to change that with our vision for a modern desktop powered by Windows 10 and Office 365 ProPlus. [emphasis added]

All future feature updates of Windows 10 Enterprise and Education editions with a targeted release month of March (starting with 1903) will continue to be supported for 18 months from their release date. This maintains the semi-annual update cadence as our north star and retains the option for customers that want to update twice a year. [emphasis added]

Microsoft still wants to achieve this goal but has recognized that, for big companies, this is not doable at this speed at the moment.

We expect Microsoft to announce new tools under the Windows Analytics umbrella (or related to that), as well as additional tools or services to bolster their Modern IT Vision. In addition, they will continue to further develop strategic partnerships with their hardware partners as well as their ISVs to allow their partner ecosystem to create tools and services around this goal. One of the prime examples of this is our recently announced Dashworks Windows Upgrade Readiness Connector and the deep integration of Juriba's IT Transformation management tool, Dashworks, into the Microsoft desktop management world. Once Microsoft feels that all puzzle pieces are in place, they will probably accelerate the enterprise upgrade cycle again.

In addition, from a customer perspective, the need for fast upgrades doesn't go away by Microsoft extending support to 30 months. Most organizations will want to take advantage of the new security features, and hardware vendors may not be able or willing to support this lifecycle. While I expect that most organizations will switch their strategy to a 12-month or a 24-month support cycle (i.e., only the 09 releases), you have to determine your optimal mix of risk and reward. '