This post is part of the "Definitive Guide To Windows 10 Servicing" blog series. Last update: Sept. 2018.

A few days ago, Microsoft announced exciting details about the planned Creator Update for Windows 10, which was published in April 2017. This was the company's third feature upgrade release in almost 18 months after the initial Windows-as-a-Service release (1507) was released after the November Update (1511) and the Anniversary Update (1607).

But the launch of this new upgrade may mean more than just creativity and gaming experiences for corporate IT administrators! If you follow the official documentation, it means that within the next 18 months after the release date of a new Windows 10 version, Microsoft will have published three more!

In other words: Microsoft will support each new Windows 10 version for 18 months once released into the Semi-Annual Channel (starting with the official release date). While previous Windows 10 versions followed a different (more complicated) release and End-of-Life logic including a 60-day grace period, there will be no grace period going forward. Each feature update release will be supported and updated for exactly 18 months.

Please note, that Microsoft has announced several major updates to its support model for all educational and enterprise customers. This timeline was updated September 2018. For more information on how to better plan for Windows 10 updates and upgrades, check out this recently updated article Understanding The Windows 10 Servicing Timeline.

Why are we telling you this? Because for many, Windows 10 Servicing (or Branching Microsoft used to call it), and how IT administrators will manage this fast cadence of updates is still a mystery. Having managed large OS migration projects before, IT admins are right to worry that this could quickly become a muddled mess of unsupported machines.

But as bad as this sounds, this is actually a good thing.

Windows 10 is forcing upon enterprise organizations a new culture of perpetual upgrades, and continual maintenance plans. In essence, this ensures that the Windows-as-a-Service will have a significant positive impact on enterprise IT workload and schedules — keeping your IT estate more up-to-date, secure, and in better health than ever before. Consequently, having the right tools in place to manage these perpetual mini-projects will be a critical attribute of those organizations that succeed with the new methodologies (that's where Juriba Dashworks comes in).

On The Path To Evergreen IT

As you know, large OS rollouts usually were (and still are) incredibly complex, expensive, and lengthy. They can bring entire IT organizations to a grinding halt for a couple of years, causing most IT project managers countless sleepless nights.

Now Microsoft wants enterprises to roll out smaller feature updates twice a year and monthly security updates instead of migrating to the latest Windows version every 4-5 years. With the new methodology, planning becomes much more repeatable and deployment effort is reduced to a minimum.

Smaller updates are less disruptive and easier to deal with for an already overburdened IT staff. In theory, because every iteration consists of a small subset of changes compared to previously complete Windows versions, the migration efforts are spread out over time instead of peaking every few years, especially for organizations that are happy to run multiple devices across multiple different release versions.

Whether your organization is still in the process of planning your initial Windows 10 migration, or you are thinking about rolling out the first upgrade cycle, you are probably a little anxious about how to go through an enterprise and looming end-of-life timelines. But don't worry — now is the perfect time to put the right infrastructure and processes in place! Once you put an iterative, repeatable roll-out process in place, a lot of the anxiety will fade away.

Since the servicing is delivered differently, the roll-out and management of it requires you to rethink your infrastructure and processes to handle these mini-migrations!

The Secret Is To Create A Scalable & Repeatable Process

Basically, each subsequent feature upgrade can be seen as a mini-version of your initial migration process, but with less testing, fewer application compatibility issues, and far fewer headaches. For this you have to have precise and actionable insight into your entire estate at any moment in time, knowing which devices are requiring upgrade and how that upgrade fits with the hardware lifecycle. This way, you can assign each device, user, or asset to a roll-out wave.

Have a look at the Windows 10 Enterprise Migration Project Work Breakdown Structure (WBS) below. It shows how the initial Windows 10 migration project can be broken up and managed using sophisticated data warehousing technology, Big Data, and project management. This approach can speed up your rollout by 65%! 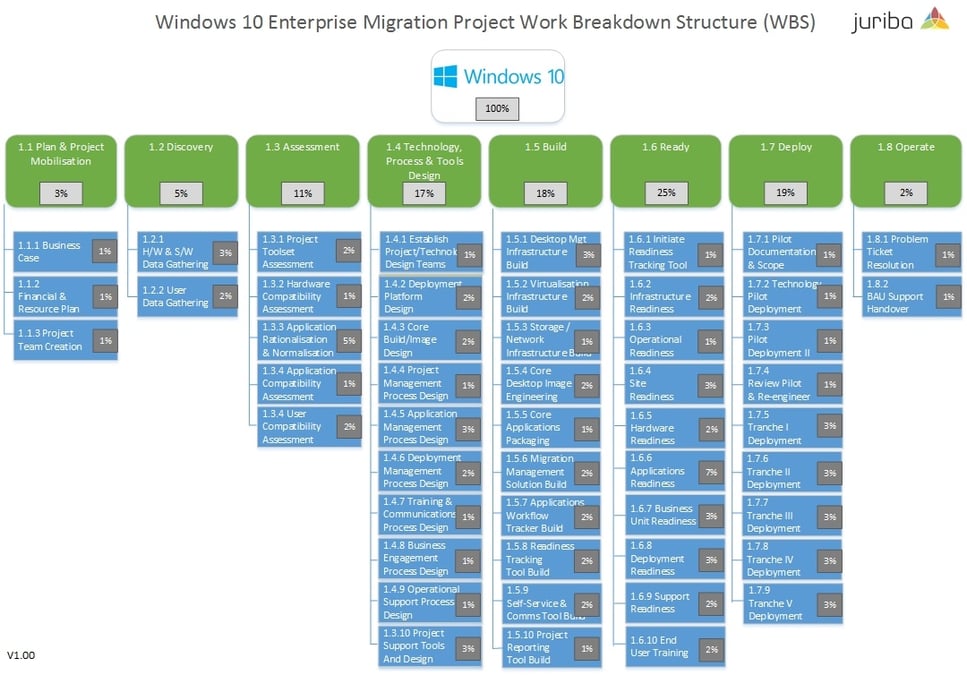 Now, let's say you have used this framework for the initial rollout and want to manage any subsequent updates with it as well. The break down of the work structure will look a lot more abbreviated. As you can see, the effort involved is minimal compared to the original migration project. In fact, instead of the average 124 weeks (or even 44 weeks for the accelerated approach), you can upgrade much faster and with much less effort than a normal OS upgrade would take.

To illustrate the entire process, let's assume that Juriba's Dashworks — as the data warehousing and project management solution — is already installed, set up and configured from the original Windows 10 migration project.

Since you will be doing this on a regular basis, you can skip through the "Planning for the Plan" phase once you have a project plan in place. Please note that while you can clone the project plan for each cycle, it is advisable to treat your project documentation as a living document, and iterate and improve upon it as you learn along the way!

With Dashworks, you immediately have best-practice project templates available, or you can clone your existing Windows 10 migration project if you used Dashworks for your initial Windows 10 upgrade project. Even if you have used Dashworks for an entirely different project (e.g., Office 365 migration, hardware refresh, VDI) before, you are starting with a headstart because all your baseline information is already there. Simply adjust the project rules, milestones and guardrails, and you are ready to go.

By the way, by allowing your users to volunteer to be part of an earlier pilot phase by raising their hand using the self-service portal, you can get greater buy-in from your entire user base.

Now that you have defined all your project guardrails and rules, you can start your discovery phase in which you will identify the details of your project scope and the best source for the required data sets, as well as validate any assumptions.

To manage the frequent Windows-as-a-Service rollouts in your enterprise, it is best to assign your entire user base to roll-out waves. For example, you can start by previewing and testing the new feature upgrade with a few pilots in your IT department, before rolling it out as a limited pilot to some business users. After that is successful, you can roll it out to the entire IT department, before tackling the entire business-user population in multiple deployment waves.

To make the process consistent, each user ideally stays in his or her assigned wave for each feature upgrade cycle unless they are required for application testing in a pilot wave.

While Windows Analytics Upgrade Readiness is not a sufficient project management tool to handle the planning, assessment, rationalization and readiness components of your migration, it does provide very useful telemetry data, including system, application, and driver data that you can use as an additional source of information to identify compatibility issues that can block an upgrade and suggest fixes when they are known to Microsoft.

Remember that Microsoft is also providing multiple methods to support the triggering of upgrades and feature releases through Configuration Manager (more on that to follow), and we'll be talking about how Dashworks complements and improves on the capability there to build a proper project rollout and methodology to handle the additional requirements for enterprises, such as application compatibility and readiness, deployment wave readiness and other items.

Within the next 18 months we will see three new upgrades go into end-of-life, so there is no escape — sooner rather than later you will have to get on board with the new and fast servicing schedule Microsoft sets.

Having successfully readied more than five million assets, we know from experience that the more your IT stays evergreen, the easier it is to manage. Instead of trying to skip and defer as many upgrades as you can, you will be better off by creating a repeatable and scalable process that uses best-practice, pre-canned project templates and improves with each iteration.