Windows 10 Support For Skylake And Other Next Generation Processors

Enterprise customers that plan to continue relying on Windows 7 or Windows 8.1 in their systems powered by 6th generation Intel Skylake core processors got a notice from Microsoft earlier this year that support for this configuration will be going away in about 18 months. Furthermore, Microsoft had indicated that older versions of Windows will not support next generation processors, such as Kirby Lake from Intel, Snapdragon 820 from Qualcomm and Bristol Ridge from AMD, according to Ars Technica.

This means that IT professionals intending to use these newer processors would have to consider upgrading to Windows 10 in the near future, perhaps much earlier than they had planned and budgeted for. 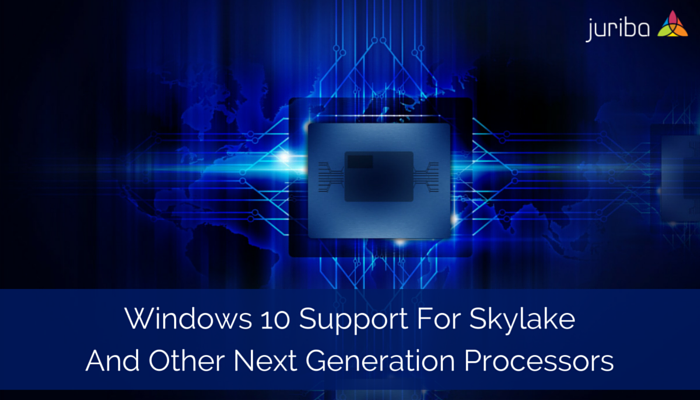 Specifically, Microsoft surprised enterprises with an announcement in January, stating that customers using Windows 7 or Windows 8.1 with Skylake processors would need to upgrade by July 17, 2017, to Windows 10. If they didn’t upgrade by then, Microsoft indicated that their systems would stop getting new updates, even though support for Windows 7 is set to expire in 2020 and support for Windows 8.1 is slated to end in 2023, noted a recent report from Softpedia.

In response to criticism from enterprise companies about the announced ending of support for older processors announcement, Microsoft backtracked a bit. “As we approached Intel’s Business Launch for Skylake in mid-January, we shared more details on our recommendations for enterprise customers on Windows 10, Windows 7 and Windows 8.1, including clarifications to our support policy for new silicon,” noted Microsoft in its official TechNet blog.

Citing a commitment to a customer-focused approach, Microsoft announced in March that it is now going to provide extended support: “Since then we’ve received feedback from customers at various stages of planning and deployment of Windows 10. Led by their feedback, today we are sharing a few updates to our Skylake support policy.”

Enterprise customers with longer timeframes to deploy Windows 10 should be relieved to hear that “the support period for Windows 7 and Windows 8.1 devices on Skylake systems will be extended by one year: from July 17, 2017, to July 17, 2018,” according to the software giant. Microsoft also noted that it will provide critical security updates for Windows 7 (through January 14, 2020) and Windows 8.1 (through January 10, 2023).

Running Windows 10 on Skylake devices gives 30 times better graphics and a three-fold boost in battery life, noted Microsoft, which many IT departments will be including in their business case plans to upgrade sooner rather than later.

Keeping Up With Next Generation Processors

The initial announcement about withdrawing support for Windows legacy systems with newer chip designs and the response to criticism from end users by extending support for one more year to 2018 illustrates the give-and-take that can occur between CPU manufacturers and Microsoft.

Major manufacturers such as AMD, Intel and Qualcomm continue to improve their products in tandem with Microsoft’s software updates, but it is impossible to perfectly sync developments between all concerned parties, after all. According to Ars Technica, the next processors to be released by these manufacturers are:

After absorbing the impact of Microsoft’s initial statement about the support it plans to provide for older Windows systems in light of next generation processors from chip manufacturers such as Intel, it’s worth examining Microsoft’s Support Lifecycle policy.

What It Means For You

According to Microsoft, the company will adhere to its Business, Developer, and Desktop Operating System Software Products policy. This is to ensure that end users in the enterprise environment will have guidelines that are both predictable and consistent when it comes to Windows software releases. Paying close attention to the support being offered will help IT departments get the best return on their computational investments.

Microsoft’s Support Lifecycle policy states that the company will offer at least 10 years of support for business operating system software products. When a version of Windows transitions to out-of-support status after this 10-year-plus period, Microsoft reminds users that they cannot expect to get security updates, paid or free support or any access to the company’s resources for product development.

That’s in keeping with Microsoft’s advice that customers should strive to remain current on all the software they deploy, to not only enjoy the latest security protections but also to get a better total cost of ownership.

If you and your team had been wondering how you were going to maintain support for your Windows system running on older hardware after the initial Microsoft announcement about ending support for older processor setups, you now have some more breathing room before you eventually upgrade to Windows 10. However, don't leave it too late to begin your project planning. Migrating to Windows 10 much more than just a hardware upgrade - there are thousands of other moving parts to consider. Keep in mind that working with project management tools from Juriba for enterprise IT transformation will make your migration to Windows 10 go much more smoothly.