To get customers ready, Microsoft is encouraging everyone to start evaluating Desktop Analytics now because new customers will no longer have access to Windows Analytics Upgrade Readiness and Device Health once DA becomes generally available. Customers using “Update Compliance” in their Azure portal already can continue to do so — even after January 2020.

But there are some customer grumbles, some confusion, and a lot of questions about the new suite of cloud services. We have had a chance to work with it for the past four weeks in an enterprise environment with ~15,000 seats to inform both on an upgrade to Windows 10 and an existing update to the 1903 version of Windows 10.

We thought it would be beneficial (especially for those of you who haven't had a chance to evaluate Desktop Analytics yet or who are not sure whether or not it is worth trying) to share our first impression of the Windows Analytics successor as well as some real-world insights and results. Today, we will focus on the readiness aspect of things as this is most important to our customers, and we will cover security, health, and performance in later blog posts in the coming months. Note that screenshots used in this blog post are from Microsoft's generic documentation as for security reasons we cannot show customer data. 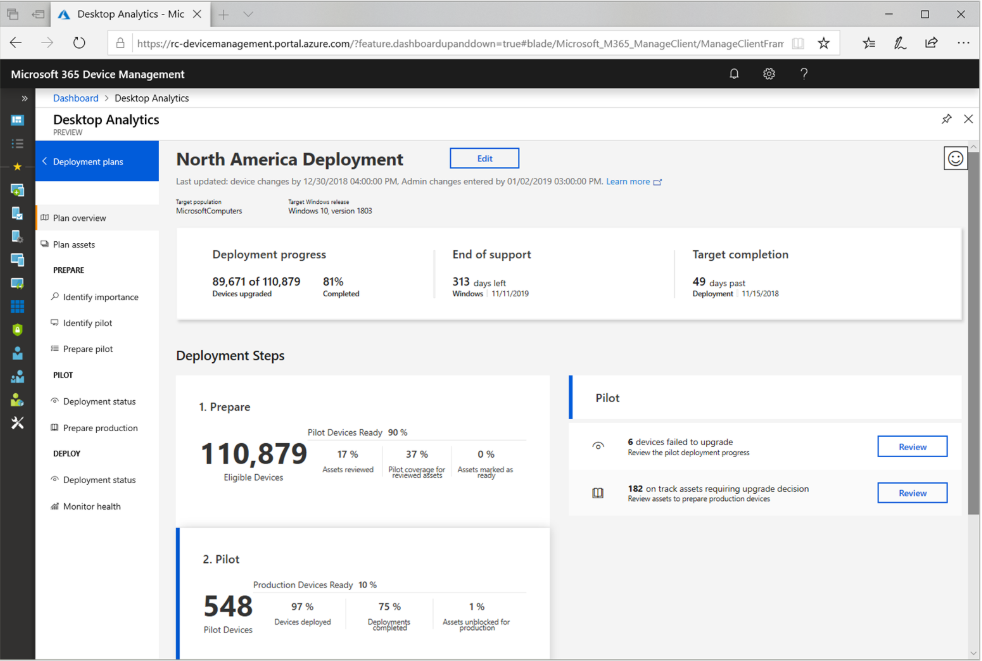 Since it was first announced at Inspire in September 2018, Desktop Analytics was pegged as the replacement for Windows Analytics. As a reminder, Windows Analytics is a suite of cloud services aimed to provide additional insight when upgrading and updating Windows 10 and is comprised of three separate services: “Upgrade Readiness”, “Update Compliance”, and “Device Health”. It was the successor of first Windows Diagnostic Data and then Upgrade Analytics.

Since then, Desktop Analytics has evolved from simply providing data to creating deployment plans based on the insights, planning and deploying a pilot, and in production devices. That's at least its function in theory — more to the actual results in a minute.

Essentially, Microsoft sells Desktop Analytics as a service that enables you to:

The idea is to identify and migrate as many no-problem devices as quickly as possible before dealing with devices that require minor intervention before being able to migrate or have problems that might have to be resolved manually.

How Does Desktop Analytics Work?

Before we dive into the pros and cons, let's take a look at the functionality of Desktop Analytics.

Once you have access and have fulfilled all the prerequisite requirements, you can log into the Desktop Analytics Azure portal. On the home screen you will find three major task categories (see screenshot below): 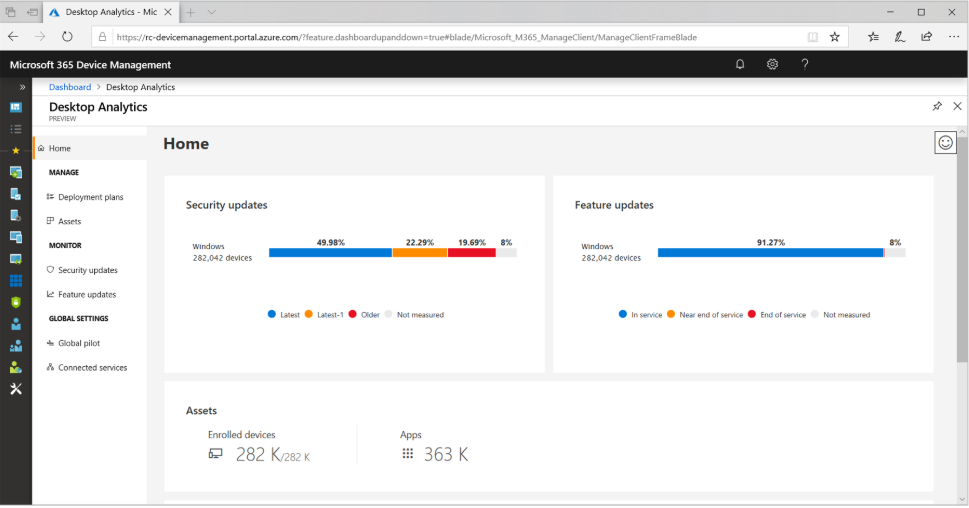 One of the areas users will probably spend the most time in is "Deployment plans" — now a critical component of the tool.

Within the Deployment Plan tab, you will find the following items:

Identify Importance - In this step, you are asked to assess (based on compatibility and other insights) and to manually edit the applications showing up in the app tab. If you assign "Critical" or "Important", Desktop Analytics will validate the app during the pilot, while apps marked "Not Important" will not be included in any analysis.

Identify Pilot - After you have categorized your applications, Desktop Analytics will now recommend certain devices to be included in the pilot. These machines should theoretically represent the vast majority of your environment. In the "Identify Pilot" stage, you will need to review them and select particular ones (ask DA to replace the non-selected ones) or bulk-select all recommended devices to be added to the pilot. You can also choose to select none of them and ask DA to recalculate. (Remember: this suggestion is only as good as your input!)

Prepare Pilot - Once you have selected which devices to include in the pilot, you can now prepare your pilot for deployment in this step.

Deployment Status - The deployment status tab gives you an overview of all your pilot devices. This can either be:

You can either get an impression of your overall progress through the pie chart summarizing the status or toggle between the different statuses to get more detail.

In our use case, the top three issues we encountered several dozen times were:

In very few occurrences, we encountered these issues:

Monitor Health - Last, but not least, you can view, troubleshoot, and fix any potential health issues on the Monitor Health page. You could even change your upgrade decision to "Unable" if needed to prevent any future upgrades on devices with a specific troublesome application.

First Impressions: What Worked? What Could Improve?

Now let's talk about the real-world impressions we got from the tool.

Let's first start with the onboarding experience — which for this particular client was a mixed experience as they encountered some challenges getting their devices to enroll into Desktop Analytics. To be fair, some of these struggles were due to internal technical network limitations when connecting to the Microsoft Cloud services to push that data up. Also, Desktop Analytics is still in Public Preview so some bugs had to be expected, but they worked closely with Microsoft to iron those kinks out eventually.

In addition, we have seen other clients voice concerns regarding the Intune integration as well as the licensing model.

To run Desktop Analytics, an organization must have one of the following licenses to gain access to the cloud services:

For many, that is a big change as Update Compliance and Upgrade Readiness were included at no cost as part of their Windows 10 Pro, Enterprise E1, and Education A1 license. Device Health only required Windows 10 Enterprise/Education with active Software Assurance.

In addition, customers who already bought into Microsoft's Modern IT Management vision and switched to Intune rather than continuing to use SCCM are now left in the rain. While Microsoft claims there will be an integration "in the near future", they have been making that claim since September 2018. Officially, Microsoft states that, at this moment, they cannot share any exact timelines on Intune support, but they have said this: "[We] are actively thinking about the best way to provide Intune customers with Analytics insights and [it] is high on our list after we GA the service." Of course this means that any devices or applications managed in InTune are excluded from any DA workflows.

Due to the limited level of detail you can access through the Desktop Analytics dashboards, the lack of adequate planning algorithms, and the fact that, for most enterprises we work with, a simple pilot wouldn't be sufficient to move into broad deployment, it is difficult to see a large enterprise running an entire migration just using Desktop Analytics. However, let us remember that it is a product in development.

At Juriba, we find that DA becomes a very powerful data source once you combine it with SCCM, Active Directory, HR data, and other location information to scope your upgrade project. Managing that project we would still strongly advise that you look at more functional project command and control tooling.