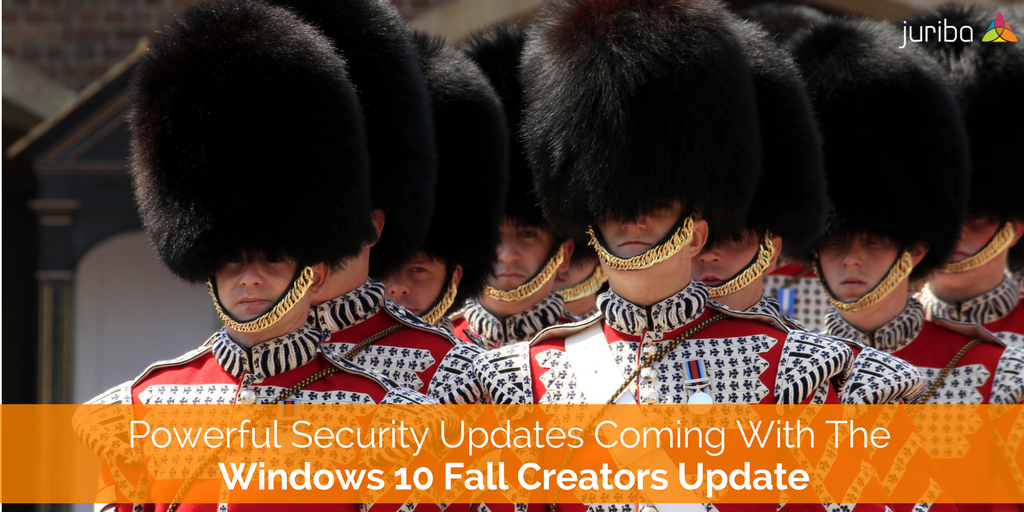 A few days ago, the credit rating company Equifax had to admit that inhackers had exploited a bug on the company's website to gain access to the personal data of more than 143 million customers. While this is devastating to those customers and the company itself, such cyber attacks are by no means uncommon. Only recently, ransomware such as WannaCry and WannaCry 2 held thousands of devices at ransom — made possible through a vulnerability in an older Windows version and therefore ultimately avoidable by upgrading to the latest version.

Hackers trying to exploit vulnerabilities in Microsoft products is not uncommon since Windows and Office 365 are some of the most commonly used platforms. Consequently, Microsoft is under enormous pressure to deliver better, tighter, and smarter security solutions that span the entire Windows stack. In the past two years, Windows 10 has seen many incredible security updates and improvements — making security the number one driver for upgrading to the latest version of the operating system.

The next version of Windows 10, the Fall Creators Update (Version 1710), will be officially released into the "Semi-Annual Channel (Targeted)" on October 17th, 2017. While this release will mainly focus on "creators," the single biggest reason why larger businesses will be interested in the upgrade is because of the significant security improvements that are currently being tested as part of their Insider Preview ring.

Most of the security advancements of the Windows 10 Fall Creators Update focus on the Windows Defender Advanced Threat Protection (Windows Defender ATP) service. This suite of tools helps organizations avoid breaches by offering device, information, and identity protection as well as threat resistance capabilities. Should it come to a breach, enterprises can leverage advanced breach detection investigation and response capabilities to ring-fence the problem as soon as possible to minimize damage.

According to Microsoft, the Windows Defender Advanced Threat Protection (ATP) service is a suite of threat detection and protection tools that now include the

The company positions Windows Defender ATP as the next generation security solution that isn't designed to only detect and respond to occurring attacks but to provide continuously learning and improving preventive protection measures while hardening the entire Windows platform against malicious attacks.

Since most people aren't familiar with each of the new/updated security solutions, let's have a brief look at these first before highlighting some of the other important updates and improvements in general.

The vast majority of malicious attacks or exploits are initiated via a hyperlink. WDAG is designed to isolate the potential threat that has been downloaded by the user using their browser to prevent it from gaining a foothold on a local machine or from spreading any further. Once detected and isolated, the tool will contain the potentially malicious code in containers using virtualization-based security. This prevents it from spreading across company networks.

In addition to the above mentioned tools, Microsoft announced recently that it will move the features of its already-slated-for-deprecation Enhanced Mitigation Experience Toolkit (EMET), a security solution that provides protections against general hacking attack techniques, into the "Windows Defender Exploit Guard" as part of the Windows 10 Fall Creators Update.

The Windows Defender Exploit Guard (Windows Defender EG) refers to a set of Windows 10 host intrusion prevention capabilities that are currently available in preview as part of the Insider Preview for the Fall Creators Update. This tool allows you to:

As the last link in the chain of the Windows 10 security stack, the Windows Defender Antivirus (Windows Defender AV) can  your investigation or response process by remotely initiating a scan on a compromised machine. The tool can run alongside other antivirus solutions.

through the unique intelligence that only Microsoft has in terms of the sheer volume of optics and engineering expertise. Using the cloud power of the ISG, along with its data science and machine learning, we can identify evolving threats from trillions of signals to block and tackle the malware and hacking threats that you encounter."

Now that we looked at the individual components, I picked out three other improvements in release 1710 I wanted to highlight.

This can be done using a single entry or multiple entries per machine:

For a step-by-step walkthrough, please refer to the Windows IT Center for instructions.

Creating a single pane of glass and full transparency is crucial for effective threat prevention and protection. Therefore, Windows Defender ATP will now feature powerful reporting and analytics. The suite leverages Power BI data connectors to connect and access your Windows Defender ATP data via Microsoft Graph. Using the familiar UI of Power BI, you can drill into single machines, alerts and status updates and have all the relevant information, such as severity and time to resolve, right at your fingertips.

Better reporting is nothing without better analytics. With the Fall Creator Update, Windows Defender ATP will feature new dashboard views that compare the current state of your organization's security situation to Microsoft's baseline recommendation. It also will offer explanations for potential problems as well as next steps to improve upon your baseline. The solution also highlights and prioritizes machines with sub-optimal configurations or that are out-of-date. In other words, IT pros can now get a realistic and complete view on their entire Windows security stack.

Before wrapping this up, I just want to quickly mention licensing.

To take advantage of Windows Defender Exploit Guard, your organization has to have a volume licensing subscription to the Windows 10 Enterprise or Education E5 plans or a subscription to Microsoft 365.

Microsoft has made enormous strides with its Windows operating system when it comes to security. It differentiates itself by not only trying to detect and respond to attacks, but by leveraging machine learning, data science, its sheer volume of telemetry data points and in-house intelligence, as well as its powerful synergies between the entire Microsoft stack to position itself two steps ahead of a potential problem.

However, the only way to take advantage of this next-gen security solution is by upgrading to Windows 10 Fall Creators Update as an enterprise customer and staying up-to-date thereafter. This requires a well thought-out IT Transformation strategy, a tight deployment schedule because of the increased pace of Windows updates and a central command and control platform that will help you streamline and accelerate your enterprise-wide deployment.