On December 16th 2019, Microsoft's Senior Program Manager for the Windows Insider Program, Brandon LeBlanc, announced in a blog post that the new Windows 10 Insider Preview Build 19536 (an early version of the 20H1) was available. However, other parts of his article made seasoned Microsoft experts wonder whether or not the software giant decouples its feature releases from its official Windows 10 upgrade releases. 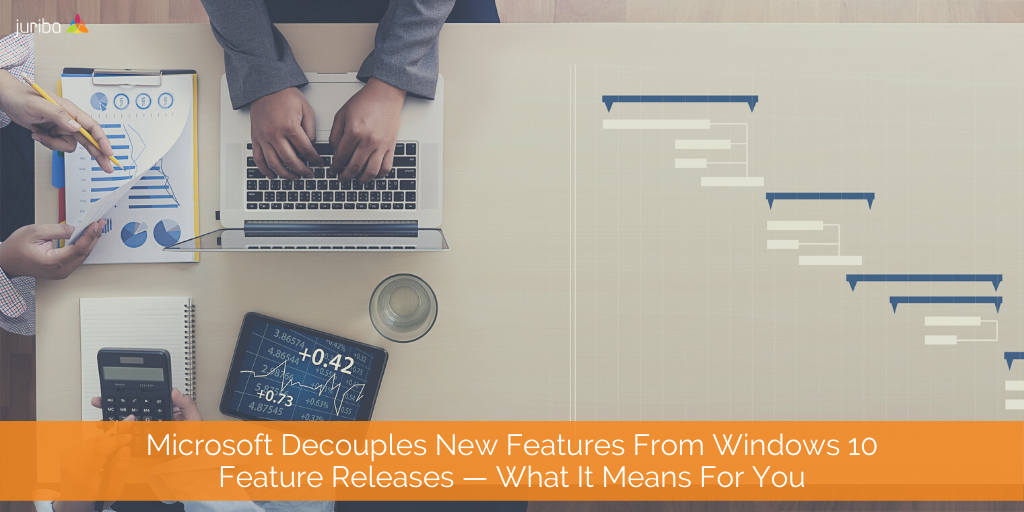 Microsoft Rolls Back 'Skip Ahead' in Fast Ring

The Windows Insider program consists of several rings: the Release Preview Ring (the slowest and most stable), followed by the Slow Ring, the Fast Ring and, until now, the Skip Ahead Ring (the fastest and most unstable). To gain access to limited spots in the Skip Ahead Ring, members of the Windows Insider 'Fast Ring' had to enroll within a certain time period. This would allow them to gain access to new features immediately, as they became available even faster than the Fast Ring — causing some confusion and frustration.

In November, Microsoft announced that these users would be migrated back into the regular 'Fast Ring', which went into effect with the release of the new Preview Build. This step was taken because Microsoft is now supplying all Fast Ring participants with builds from its active development branch called "RS_PRERELEASE” into which Microsoft developers check in their code changes into the OS. In other words, they reflect the latest developments.

While this doesn't seem to be a big deal, it has, in fact, enormous consequences for the entire Windows 10 Servicing model. As you know, since its initial release in 2015, Microsoft has aimed to deliver monthly servicing releases including patches, security improvements and other quality updates, as well as larger feature upgrades (twice a year in the past few years) that contained all new features. There were countless changes in the used terminology, the length of support windows, the release cycles, and much more.

Recently, Microsoft had seemed to have found a good rhythm by releasing two feature updates: one in the spring (with 18 months support) and one in the fall (with 30 months support). This model enabled more agile enterprises to roll out new features every six months, while slower and often larger organizations could skip a year and be just fine.

However, this new announcement indicates that Microsoft has completely revamped its Windows 10 development model by releasing new features "when they are ready" rather than tying them to specific feature releases, e.g., Windows 10 20H1. Consequently, new features can be delivered as a feature upgrade (bi-annual) or a quality update (monthly). In his announcement, Brandon LeBlanc declared:

Features Will Be Released "When They Are Ready"

One phrase in my mind — "when they are ready" — is a most curious choice of words that could be interpreted in various ways. And it seems I am not alone. Gregg Kreizer, a senior reporter at ComputerWorld known for his timely and insightful Microsoft coverage, wonders in his article if this phrase indicates that previous features might not have been exactly ready:

"But by claiming 'when they are ready' as the guide for future features, Microsoft implied that at least some had not been so when they were baked into past upgrades."

Considering that Microsoft developers had only two feature upgrade release dates to work towards, failing to meet the deadline had huge consequences. Leading up to the release of a new version, Microsoft would publicly tout the new features in the coming release, and if the team would miss the train, users would have to wait another six months — or even a year, if rumors of minor and major upgrades can be believed.

But you can also see it the other way around: releasing features when they are ready gets them out sooner rather than later — which brings me to another consideration.

Has Microsoft Found A Way To Decouple The Windows CoreOS From Its Shell Features?

Kareem Anderson, a contributing editor and writer at OnMSFT, wrote an article about Walking Cat's suspicion that Microsoft might have finally found a way of decoupling its Windows CoreOS from the shell features.

this 'undocked' thing could also mean the separation of works by the two groups of original Windows team, the CoreOS team may follow the pace of Azure org, while the shell experiences part can evolve independently and much faster 🤓

If this is true, this could mean that the recent reorganization of the Microsoft dev teams could have resulted in two separate teams:

Considering that Microsoft was "experimenting" (or maybe testing the waters for a reaction) by publishing effectively one major upgrade in the spring and releasing a very minor upgrade in the fall, one could see how the core OS gets an upgrade every year while features will be released "when they are ready" on an ongoing basis for enterprises. This still slots Microsoft into an OS-as-a-Service support model while providing enterprises with a much different upgrade dynamic.

Much of this is still speculation, but the timing of the announcements and pieces of evidence suggest that we might be in for another major change to the Windows Servicing model in 2020. At this point, much of it also could be a smokescreen to dodge the question of how the company will proceed with its OS support model.

As Windows 7 officially goes end of life in just a few days and many enterprises still have not migrated to Windows 10, Microsoft must feel the need to change something drastically to get larger organizations on board. Microsoft said they will closely monitor customer feedback — just as we will closely monitor any other evidence pointing one way or another, so stay tuned.

While there is no need to panic (as I said, it is much too early to know what exactly will happen), we highly recommend that organizations start moving towards an Evergreen IT approach. In other words, start managing smaller, iterative upgrades rather than big bang migrations. This new IT management approach enables you to deal with changes much faster and with less disruption — no matter what the future holds.