Windows Server 2016 & How It Will Impact Your IT Strategy

On October 15th of 2016, Microsoft released Windows Server 2016. There's been a lot of buzz about the new release, and with good reason! The latest version of the Microsoft server operating system adds some much-needed functionality to Windows environments, as well as a few key security features that previous versions were lacking. If you're not sure whether the hype train is worth getting on, then buckle up.

Here are the top features of Windows Server 2016 that, in our opinion, make it well worth the excitement.

Nano Server's tiny installation footprint (92% smaller than Windows' previous iteration, the Windows Server GUI) makes it a responsive and dynamic tool for anyone managing a large set of virtual machines. As private clouds and service providers are blazing trails when it comes to density of VMs, Microsoft recognized that it needed to strip Windows Server of some of its unnecessary weight. The result is a bare-metal, stripped-down server operating system with huge efficiency gains, yet very few needs in terms of updates and reboots, which streamlines your VM management.

The Nano Server is completely headless, and is designed to be managed entirely remotely. For those not willing to take that particular leap just yet, Nano does include a Recovery Console as a local management UI just in case you need to handle it without the use of a VM. Since Nano Server is so small, it can easily be ported wherever you need it: physical sites, servers, data centers, whatever your environment requires. Nano is definitely a move towards more cloud-oriented virtual machine management technologies, and it's a pretty substantial step in what seems like a very productive direction.

In the past, Hyper-V has allowed an administrator to create shifts in virtual hardware or RAM allocation on a virtual machine, but only after powering down the VM. While its predecessor, Windows Server 2012, already included dynamic memory, Windows Server 2016 introduces a "hot-add & remove of memory" feature. Officially known as 'Runtime Memory Resize', but usually just referred to as "hot add", it allows an administrator to adjust virtual hardware even while virtual machines are up and running.

While it is not suitable for all scenarios (e.g., if constant memory changes are too cumbersome for billing and resource planning), it will prove very useful in many other scenarios as it allows admins to set the memory resource to a specific value without having to restart the operating system of the guest PC. This adds a great deal of convenience for system admins — a definite win!

Containers have long been a coveted feature in Linux/UNIX open-sourced systems, but Microsoft has taken a big step with Server 2016. They've teamed up with the folks at Docker to bring containers from the Docker system to Windows Server 2016. Much as the moniker implies, containers allow admins to isolate various applications and services, while simultaneously making them easier to administrate on systems. 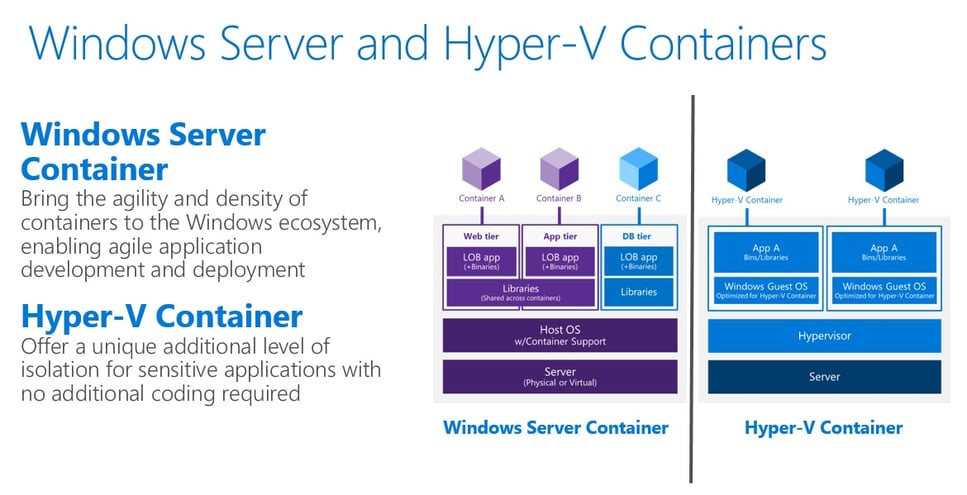 These two types of containers give administrators some options when running workloads that require any degree of trust.

Previous versions of Windows Server have not allowed for any type of nested virtualizations, but Windows Server 2016 has fixed this oversight. Nested virtualization allows businesses to deploy Hyper-V hosts while minimizing the cost of hardware, as it allows virtual machines to (in turn) host other virtual machines. In short, this creates an economical means of deploying multiple VMs. Thanks, Windows!

Consideration Of A Hybrid Environment

Microsoft's vision for the future of large systems is definitely in the cloud, but the meantime sees many environments that aren't entirely reliant upon cloud resources for computing. In short, environments need to support hybrid assets, both physical in-person computing as well as VMs, for the near future. Windows Server 2016 is prepared to work seamlessly with Azure Stack, coming in the middle of 2017, to streamline a hybridized environment.

Windows Server 2016 creates many additional opportunities for this; improving Hyper-V with the addition of shielded virtual machines to allow for greater means of data encryption and secure deployment, as well as PowerShell Direct, which allows direct access to a Hyper-V VM without any additional fussy configuration. In short, Windows Server 2016 is poised at the brink, ready to usher in a future of hybrid work environments for any large system.

ADFS (Active Directory Federation Services) gets an upgrade to version 4 with Windows Server 2016. This claims-based identity system is now (finally) able to support several additional authentication methods, including multi-factor authentication (MFA), and OpenID Connect-based authentication. Microsoft has also added a feature that they call "hybrid conditional access", allowing ADFS a response even when either a device or user is found to be non-compliant with security policies.

On the whole, these are definitely new and great features to get excited about, and certainly reasons to give Windows Server 2016 the attention it deserves in your hybrid environment.