The Hidden Costs Of Your Aging IT Infrastructure

According to Gartner, worldwide IT spending is expected to reach $3.5 trillion in 2017 — representing a modest annual growth of 2.9%, which is mostly driven by new software purchases ($357 billion) and the cost of IT services ($943 billion).

That is a lot of money, especially if previous ascertations that 80% of enterprise IT budgets are not directly contributing to enhancing your competitive advantage or growing your business remain true, and are being used to simply keep the lights on!

But while we might have been able to accept that as a fact of life in the past decades, times are changing!

Historically, purchasing expensive hardware, servers and other costly equipment using Capital Expenditure, and stretching the investment as far as it could go before replacing, made financial sense.

However, now with technology infrastructure demand evolving much faster, and the requirement for a consistent and understandable IT budget, that calculation will not add up anymore. Aging infrastructure brings a lot of hidden costs as it results in performance degradation, rising maintenance costs, energy inefficiencies and much more, resulting in the kind of boom-bust budgeting of the past decade.

Let's have a closer look at each in more detail.

Every year, technology makes huge leaps regarding processor speed, energy efficiency, RAM size and more. Currently, the lifespan of a server is about 3-3.5 years — but as time goes on, this window will only shorten.

Applications are also based on the current hardware specifications to take advantage of the latest technology advancements. Therefore, aging equipment will, in fact, slow down applications running on them, causing inherent performance drops. As you can see from the chart below, the relative performance of an IT asset declines by 22% in year three, by 33% in year four, and a staggering 59% in year seven!

Aside from the fast and steady performance drops, the graphic also shows the increasing costs that are associated with aging hardware.

While the initial cost of supporting and administering a server remains relatively constant in the first three years, leaving aging servers or hardware in place until doomsday is costing organizations much more than it would require to upgrade or refresh them on a perpetual basis.

Older hardware means complicated breaks, stalling, and lagging, so just to keep the device from completely breaking down, you will have to keep patching and fixing, which is expensive. By its fifth year, the expenses of supporting and maintaining a typical server have already increased by 148%! In year seven, the costs of maintaining have climbed to an exorbitant 300%!

In addition to just plugging holes to keep afloat, your hardware will require more power and cooling. Considering that the energy consumption of US datacenters is equivalent to the amount of electricity consumed by about 6.4 million American homes, energy efficiency is a huge concern! That is why every new server is more energy efficient than its predecessor. They will also be more consolidated and smaller, requiring less square footage and cooling, whilst providing greater capacity.

Aging hardware results in a variety of opportunity costs. Using older versions of software leads to performance drops, and you lose out on consolidation opportunities and improved reliability that modern server infrastructure provides.

By running new software on old hardware, you are bound to encounter conflict and inefficiencies — if they are even compatible. For example, newer software that is built to take advantage of more modern hardware will potentially slow old hardware down even more.

With each hardware refresh, you can run about 30% more apps at the same time on the same device. Also, newer generations of servers allow for a higher density of virtual machines, which means that heavy-load business applications can be run in a virtualized environment. Since those systems are more powerful, you might need fewer software licenses, and can consider a concurrent platform.

However, a loss of productivity and higher maintenance costs are not the only mission-critical concerns. To demonstrate the severity of this issue, Cisco recently scanned 115,000 of their customers' devices on the Internet. They found that 92% of the sample had "known vulnerabilities in the software they were running”, with an average of 26 found issues per device.

Hackers are now more sophisticated than ever, studying the IT's architecture trying to find loopholes to infiltrate it. As your hardware ages, hackers have had more time to learn how to break past the security guards. Meanwhile, the latest firmware and patching updates have to be applied — if the manufacturer is still producing them. This process can be cumbersome and time intensive, as you have to ensure application compatibility as well as security compliance, which gets harder the older your server becomes.

In addition to security holes, you have to make sure that all your assets are in compliance with your organization's and government regulatory requirements. By simply always patching and fixing, you are creating a suboptimal solution to meet those standards, and you are constantly treading on the border of being out of compliance.

One of the most pressing concerns of aging hardware is, of course, reliability. A sudden system failure and the resulting server downtime can have severe consequences on your bottom line. According to the above-mentioned IDC report, the average downtime per server increases from 2.6 hours in the first three years to 5 hours in servers older than five years.

However, it is not only the server downtime and the resulting cost and resource strain in case of an outage that should be considered. By having to use older software, you are missing out on the better asset management capabilities for better workload and performance tracking and analysis that come with current versions which are critical for enterprises today, as they use this granular level of system information to scale their data centers. Improved predictive failure capabilities can also warn you and your service partner of any compatibility issues or potential outage risks — allowing you to be proactive and in control, which in turn will lead to better support contracts and fewer uncomfortable surprises.

There are currently two approaches to hardware refreshes: ad hoc or scheduled. As the name suggests, the ad-hoc approach is taken in case of hardware failures, security breaches, or other events that make a refresh necessary right away, while the scheduled update is based on a particular lifecycle. This can be a maintenance contract, depreciation schedule of acquisition cost, or leasing period.

However, the ad hoc approach comes with hidden costs. For example, as the server ages, finding replacement parts is becoming increasingly more challenging as they are simply not as available anymore, and the ones that are have become more expensive. Also, having to replace your server on the spot rather than in a planned roll-out will result in a big scramble to get resources, and that limits the available financing options significantly. Since maintaining older systems is also expensive for the hardware manufacturers, service contracts are usually limited to three to five years. To stay within warranty, you will have to extend your contracts, which is often less economical than purchasing a new server.

Half of the CEOs surveyed by Gartner expect their industry to go through a phase of digital transformation so intense that their business environment becomes mostly unrecognizable within the next five years.

Tweet This: Gartner: 50% of CEOs expect their industry to be unrecognizable in 5 years!

Today, CEOs already face a new breed of competitors that were "born in the cloud," while existing rivals scramble to leverage technology innovations such as cloud computing, big data, as well as mobile and social. A CEO today must strive to provide the best possible customer experience and to gain an edge on their competition by differentiating themselves. Many executives know that, if their organization cannot adapt fast enough, they will not need to keep the lights on any longer. Therefore, they make digital transformation their personal key priority for 2017. 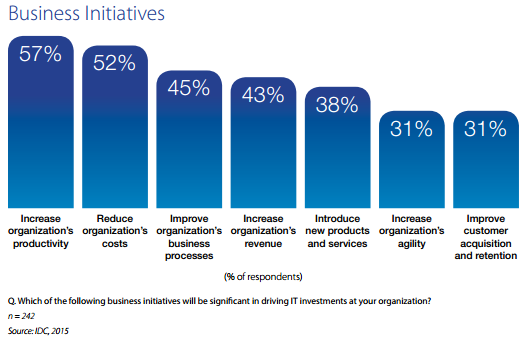 Since IT plays such a key role in enabling this digital transformation, it has morphed from a purely supporting function serving the line-of-business to an enabler of change. This becomes especially apparent when you look at how IT spending is now directly tied to business initiatives:

However, this new responsibility puts most CIOs into a seemingly tight spot as they already struggle to keep abreast with the ever growing and compounding IT debt, as well as their increasingly complex and costly IT landscape caused by aging infrastructure. So, they will need to either take a significant bump in their IT budget of 50-100% or optimize their IT landscape to become Evergreen, in order to be agile enough to drive innovation.

With all the hidden tangible and opportunity costs that come with aging hardware, it only makes sense to keep your entire hardware estate (servers as well as any end-user devices) on a steady refresh cycle. By using Juriba's enterprise IT Transformation management solution, Dashworks, you can not only gain actionable and real-time insights into what your IT landscape looks like, and consolidate hardware vendor names (e.g., HP, Hewlett-Packard) and versions to get a more accurate picture of what you actually have running, but you can also determine candidacy and capacity to mange your upgrade waves and much more.

Learn more about how Dashworks can enable your IT organizations to drive digital transformation — not just keep the lights on!