TechEd is Microsoft's conference for IT Professionals and Developers, a showcase for current and emerging technologies, and invaluable if you want to know where the future lies for Microsoft products. 2012 saw the European leg of TechEd in Amsterdam - a great city and a good choice in Juriba's opinion. We were there with our code cracker game as part of the System Center Partner Pavilion. It's a great conference for us, we get to connect with all our our IT Pro customers and keep our development fresh by staying on the sharp end of the latest Web and BI technologies. 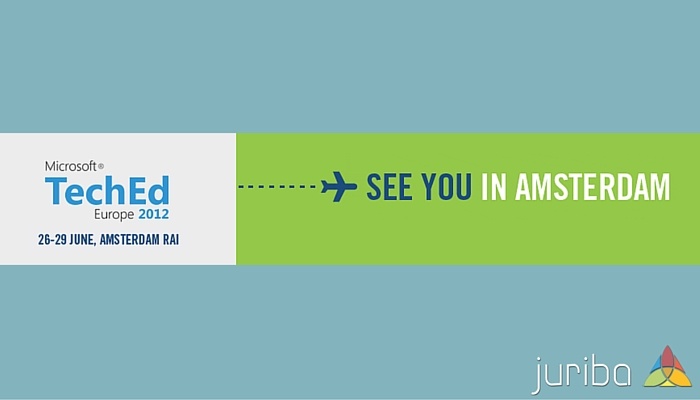 2012 is a big year for Microsoft with new releases of Windows Server, SQL Server and System Center, not to mention Windows 8: there was plenty for them to flaunt.They have also clearly been paying attention to the competition, with many of their developments being directly targeted at markets where they haven't traditionally dominated. As Apple are rolling down the shutters to make their system more and more closed and even Google are raising eyebrows over whether open source really means open; astoundingly Microsoft are going the other way and becoming more open-minded. Windows Azure now supports Linux and multiple demos were given on iPhones.

Windows Azure featured heavily, as Microsoft (quite rightly) see IaaS/PaaS as a market with huge potential. It was billed as a low cost platform to build "Internet scale" applications, defined by Brad Anderson as high availability both temporally (24*7*365) and geographically coupled with massive scalability. XBox Live and Hotmail were cited as confidence builders that Microsoft had the experience to architect and host cloud services which could support the most heavyweight of applications. Interestingly Microsoft see their cloud offering having a lot of synergy with the traditional data center. System Center tools now manage both, with virtual machines moving seamlessly between corporate-owned hardware and external third party providers (such as Windows Azure). Even Visual Studio 2012 can publish directly into Azure.

Microsoft were on the attack with virtualisation. They are proud of their achievements and keen to outshine VMWare. Jeff Woolsey showed us that Hyper-V can achieve 1 million IOPS from a single virtual machine, outstripping threefold VMWare's claim to 300,000 IOPS from a single VM. And it didn't stop there. 320 logical processors per server (64 per VM), 4TB of memory per server (1TB per VM): the case for physical machines is diminishing rapidly, along with VMWare's long time stranglehold on the virtualisation market.

Powershell, and the use of it for automation, was a pervasive theme. Windows server has 2400 new commandlets, bringing the focus back to the command line and showing that Microsoft are serious about appealing to the Linux and Unix market. The use of powershell in the System Center products has been expanded considerably. Runbook automation is a great feature that allows you to use a GUI to map out your business process, whilst leveraging powershell to do the grunt work. It will be an interesting feature for those building offshore, or other low cost, teams as it brings further separation between engineering and operations.

There was a stunning demo of the new data visualisation features in SQL Server 2012 using twitter to predict revenue on any given movie. However it's hard to know if PowerView is flexible and practical enough to withstand life outside the lab. Traditionally, Microsoft's own reporting technologies have been limited (think SSRS or SCCM reports), so although this is a step in the right direction, I suspect the technology will have a way to go before having a significant corporate take up. 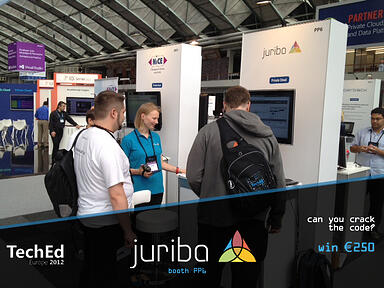 As with MMS, Microsoft was keen to show that BYOD was not something to be afraid of. Brad again encouraged a balance between control of corporate assets and governance of personal assets. A clear example was given: setting a power on password and encryption policy for users who wanted to download corporate email to their personal device. Giving the user the choice of accepting the policy and using corporate systems or not. Microsoft clearly has an interest using the pervasiveness of mobile devices to boost sales of it's tablet and phone OSs, but there are advantages here for the corporate too. If employees are made more productive by the use of mobile devices in otherwise dead time, and they are funding these out of their own pockets, why not embrace the trend? Of course, for all of this to work it's essential that you are running your desktop operations in a user-centric fashion. This seems the obvious route these days, but it's not something Microsoft has supported well in the past and it will be a painful, if worthwhile, transition for many.

BYOD was used to showcase another of Microsoft's wunderkind: Windows InTune, a cloud-based management tool with a very slick HTML5 interface. It's aimed at SMEs with a subscription pricing model, charged per device. Apparently trying to fill a gap between companies requiring a significant infrastructure to manage their desktop environment and those who are too small to worry about it at all. I'm not sure that this isn't just a dead spot in the market, but time will tell. Either way it was a shame that the demonstrations didn't make a better argument to those likely to be most resistant to BYOD, the large enterprises, by using System Center which is also billed as having the same functionality.

Windows 8, of course, got a lot of airtime, glossing over the fact the most large corporates are still in the planning stage for their Windows 7 migrations. The metro UI is conspicuously designed for compatibility with touch devices, a factor which has prevented most corporates from considering it a viable alternative to Windows 7 in their current desktop migration programs. However Microsoft were keen to show that the same interface (not the classic version) is just as usable with a keyboard and mouse. The demonstration was credible, but the technology isn't the barrier here, much more burdensome is the user education and acceptance. Windows 7 is coming to the corporate desktop at time when the majority of Windows home PCs already have it installed, so there is little incentive for corporates to pioneer into a new technology that their users are unfamiliar with when, given time, the consumer market will do much of their hard work for them. Nevertheless, Microsoft is on the right track with Windows 8. Next year it is expected that tablets will outsell desktops, and the traditional PC is looking more and more like a dinosaur. Battery power, touch screens and persistent connectivity are now shaping the landscape of consumer computing. Concept devices from all the major PC manufaturers are blurring the lines between desktop, laptop, tablet and mobile devices. 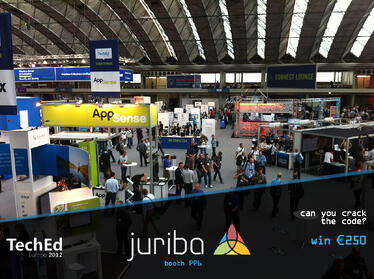 The metro UI is great, gone are the system tray, start menu and desktop, replaced with a single dashboard that is customisable and content-driven. The departure from the classic windows will undoubtedly cause the developers some headaches but the fact that Windows 8 is backwards compatible gives them some breathing space. Ironically, this is the first version of Windows that really doesn't have any windows any more. The applications are full screen and borderless, with a flat style making it impossible to tell the difference between web-based and local applications, not that it matters in a world that's always connected. Semantic zoom applies the same pinch and stretch used to zoom in and out visually, to navigate logical hierarchies, for example switching from a month, to a week, to a day view of your calendar. "Charms" on a pop-up when you swipe from the right of the screen make navigation very quick, appearing directly under the natural position of your right thumb. Swiping with your left thumb switches between apps. It would be nice to think that all this is setting the foundations for a common set of touch gestures across different applications and devices. Though frustratingly, manufacturers don't seem to be able to agree on whether scrolling with a trackpad should go in the same or the opposite direction as a touch screen. Microsoft has kept to the traditional option of the trackpad controlling the scroll bar rather than the screen, with Apple recently switching to get the trackpad working in the same way as the touch screen.

Windows 8 has had another stab at system wide search, a thorny area for Microsoft who have always struggled with the Google-style fuzzy search functions similar to Spotlight on the Apple Macs. The 3D visualisations in mapping were striking, an area which has seen heavy investment from all the major players. Windows-to-go was a flashy demo, but booting an OS from a USB stick is old news and long overdue for Windows support. More impressively, the OS can continue to run even when the USB drive is disconnected, as long as it replaced within 60 seconds.

All in all, Juriba had a great time at TechEd Europe 2012. Thanks to everyone who stopped by our stall, especially those who had a go at our code cracker game. It was great to meet all of you and we hope you had as much fun as we did. See you all next year.

What did you make of TechEd Europe 2012? Share your thoughts!