Last month, we partnered with Flexera to present the webinar entitled "Time is up for Windows 7: How to position your organization for Windows 10 and beyond" hosted by myself and Adam Jeffries, Senior Solution Engineer at Flexera.Whether you have attended the webinar or not, we wanted to share the questions asked at the end of the webinar and what we answered in this blog post as we thought they would be helpful to our subscribers. Don’t forget that you can watch the recorded webinar here as well. 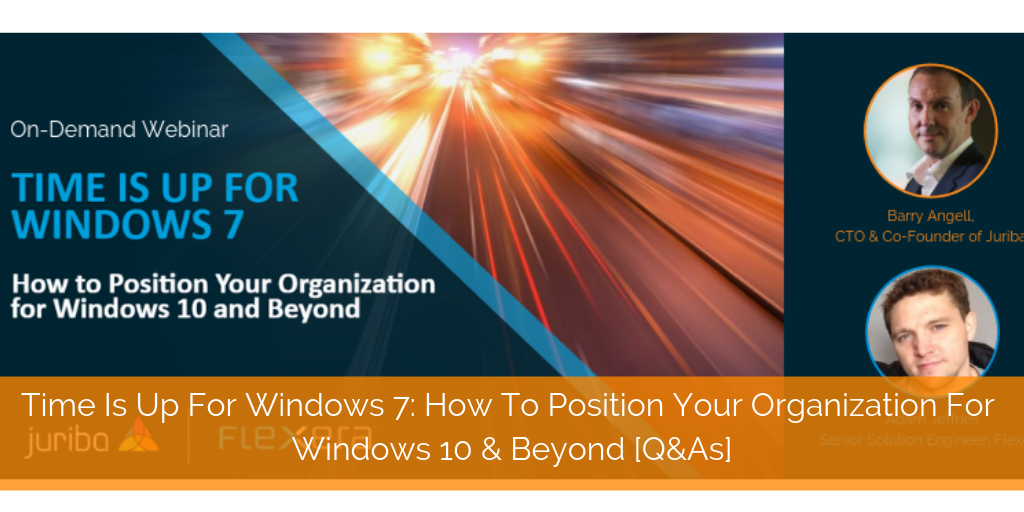 1. How can the applications be rationalized using Dashworks for every feature update?

Barry Angell - As shown in the screenshot presented during the webinar, each feature update is effectively a separate project within Dashworks, therefore applications are ordered into each project individually and we can make different application decisions per feature release. So we may have an application which is being kept for 1803 but then gets rationalized for 1809 to an upgraded version or one with similar functionality (e.g. WinZip to 7-Zip). Because the Dashworks platform is running those separate projects you can mark it as a 'keep' application on the 1803 project and you can mark it as a 'forward-path' application for 1809. Equally, we can take the rule set out of one project and apply it to a second project. For example, if we've already rationalized an application, but we notice in the estate that the old versions reappeared on a couple of devices, we can then automatically forward-path back to the new one as part of the new project. Ultimately it’s about really understanding your current state, target state, and the mapping between them, but doing that individually for each project so that you can have an app that is effectively green for 1803 but might turn red for 1809 because we need to do something with it. That something with it could be a license update or a rationalization or forward-pathing it to another functionally similar application.

2. What is the pace of the third-party core applications drivers made ready for each feature release?

Adam Jeffries - The dataset itself is being changed on a daily basis within the Flexera data platform. There are thousands of different updates happening on the catalog to be able to make sure that only up-to-date information is stored. This is combined with tools like AdminStudio to make sure users receive the right logic for testing, compatibility, upgrading.

In the general market, vendors are struggling to keep up with the feature release cadance but with more and more vendors signing up for the WIndows Ready program, and Microsoft really pushing the resources within it, we are hoping that driver issues will begin to reduce.

3. How will businesses be impacted if the Window 10 feature update adoption rate is slow by organizations?

Barry Angell - This is exactly what many organizations are seeing today, we had quite a few early adopters of Windows 10 that might have rolled out 1511 or 1607 and then didn’t start to manage the servicing update so they’re still running that same old version. Now, of course that version has gone end of life and now that the release cadence has changed we’re running into issues. Microsoft kept changing the support lifecycle for those early releases. As you might have already seen, typically the support for these initial updates kept being pushed out by 3 to 6 months to give people more time to do the upgrades, but a lot of organizations didn’t have the people, processes and tooling in place to manage them. So ultimately, getting to the answer to this question, the organizational adoption rate is definitely slower than Microsoft would wish for. The Microsoft release cadence is now not going to change and as we move forward, we will not see the support extensions of the past for old versions of the Windows 10 OS. This means that we have to drive the cadence and the technology change and we have to put the process in place to keep them in lifecycle, because going out of lifecyle isn’t really an option from a Microsoft perspective. We can’t expect them to keep extending support as it does not fit with the modern desktop model. This obviously drives business impact, so if we have in-house applications that need remediating, it does give us a much faster timeline by which we need to fix them and this is why Microsoft have released solutions like AppAssure and other resources that have basically given us another back stop from which we can remediate those applications and hopefully get them compatible. Equally, there is a great risk that we cannot achieve this cadence of change within certain organizations, given the application complexity that they have, and that’s why we have to use the data much more effectively to drive that velocity and deployment as quickly as possible.

4. How safe it is to keep Windows Analytics data on the cloud?

Barry Angell - Even though this should be asked to Microsoft directly, we can confirm they are asking customers that if they want to use Windows Analytics to perform some of the device driver and application compatibility, they have to effectively turn on telemetry and then agree to their data being hosted on the Microsoft cloud. This data comes in two formats, a slimline format and a full format. So it’s up to the customer whether or not they want to send just the slim data or the full version. Microsoft will then use that data within their warehouses to analyze and assess how many times each of these applications are used on each particular version of Windows 10 and that’s typically used to the derive compatibility with the target OS. So essentially, if an application is seen on more than 100,000 devices, Microsoft will assume that the app is going to be ok on that version of Windows 10.

Adam Jeffries – In addition to what Barry mentioned, in terms of Technopedia, we’re not storing any customers data in the cloud and we have our team of researchers and content engineers who test these products regularly.

5. How do you or will you address network (WAN/LAN) shortcomings? By shortcomings I mean, circuit bandwidth to apply silent upgrades.

Adam Jeffries – Concerning Flexera, AdminStudio will integrate with a wide range of different deployment options that utlize SCCM, it will do the packaging in testing but then it uses those deployment tools to actually enact those changes.

6. Can you import the lifecycle data from Flexera into tools like ServiceNow?

Adam Jeffries – Yes, absolutely! There are a couple of options to do this. Customers are going to want to make sure they can get this clean and enriched inventory data into their CMBB firstly, so they can drive a lot of the benefits of having identified products and start getting quick resolution times. In terms of lifecycle, there is also the ability to bring in to ServiceNow the product catalog from Technopedia that gives you instant access to 2.5 million products and it also means you can import the lifecycle information.

We hope you enjoyed this webinar, feel free to ask any further questions in the comments below. Make sure to visit our events page regularly to register for our next webinar with Flexera!