There have been a lot of changes in 2020 with regard to how Microsoft is servicing their as-a-service products such as Windows 10 and Office 365. You can see our posts that we regularly update on the Windows timeline, and our Definitive Guide on Microsoft's X-as-a-Service page to have release and EOL dates and current terminology in one place. However, since there have been so many changes to Office 365, to avoid confusion, we are not going to update our Office 365 timeline post, but we will keep it for historical reference purposes. This post you are presently reading will serve as the new post for the Office 365 timeline, which will include the major changes in 2020/2021 that have been made.

For most enterprises that have migrated their organization to Microsoft's as-a-service version of Office, it is most likely known as Office 365 ProPlus, Office 365 Business, or Office 365 E1, E3, or E5. Where does Microsoft 365 fit into this? First, you need to understand the vital distinction between the plan your organization is on and the Office Suite you are using, which do not necessarily share the same name.

For instance, if you are on the E1, E3, or E5 plan, your plan name has not changed, but what has changed is the version of Office 365 ProPlus that comes with your plan. In other words, the suite of productivity tools that your employees use on a daily basis — Word, Excel, PowerPoint, etc. — will be collectively known as Microsoft 365 with an appropriate suffix based on your plan (i.e., Business Premium). For most enterprises, the name will be Microsoft 365 Apps for Enterprises, and Microsoft will generally refer to it as Microsoft 365 Apps.

The main reason for the name change is to reflect the way companies use Microsoft's services, Office, Windows, and Enterprise Mobility and Security (EMS) as a licensing bundle. For full details on the reasons behind the name change, please see Microsoft's post about the change and this post for admins.

While the name of your plan and the product you are using has changed, what is most important is which Update Channel(s) your employees are on, what each channel is best for, how often they receive updates, and how long they are supported for.

The six (6) channel choices are:

The Beta Channel is best suited for a small group of your early adopters, developers, and IT pros. This is the earliest build available for Microsoft 365 Apps. However, it is not supported, and therefore should only be used in test environments.

Having a select group of users on this channel will allow your enterprise to validate and explore new Office features before they are made part of an official release. This channel is a precursor to the Current Channel (Preview). For more information, see this article on the Beta Channel and this one on its release notes.

This channel is similar to the Beta Channel in that it should be released to a small group, in this case, a representative sample of users from your company. However, unlike the Beta Channel, this version is supported until the next version is released, usually monthly.

Current Channel (Preview) is your organization's opportunity to identify issues for Microsoft to fix before they are released into the Current Channel where they would otherwise trouble the majority of your users. There is no set time-frame for releases into this channel, and there is usually at least one (1) release per week.

Important note about the Current Channel, as of June 9, 2020: It is the default channel for Microsoft Apps for enterprise in most cases, instead of the Semi-Annual Enterprise Channel.

Usually there are 2-5 total releases for this channel each month, and it is supported until the next version is released, which is usually the next month. Microsoft recommends this channel for the majority of your users, as it gives them the most up-to-date supported version.

However, for enterprises with employees using LOB critical macros, add-ins, etc., this version moves too fast, so they should change to a different default channel.

For more information on the Current Channel, see Microsoft's overview and the update history.

The newest channel, the Monthly Enterprise Channel, is similar to the Current Channel with its fast cadence of releases, but it is more predictable and stable. On this channel, feature, security, and non-security updates are released once a month on Patch Tuesday. The features that are released into this channel are ones from the Current Channel that meet certain criteria from Microsoft.

Each version is supported for two (2) months, which means that Microsoft supports two (2) versions at any one time. Based on this release and support schedule, enterprise users that don't require extensive testing (add-ins, macros, etc.) can be more secure to have access to the latest features at a much quicker pace than before.

The Semi-Annual Enterprise Channel (Preview) is the precursor to Microsoft's final and longest-serviced release, the Semi-Annual Enterprise Channel. The Preview Channel should be deployed to a representative portion of an organization to find any potential issues and conflicts for Microsoft to resolve before it gets released to the rest of the company.

The Semi-Annual Enterprise Channel (Preview) is released with new features twice a year: on the second Tuesday of March and September (Patch Tuesday). Then, four (4) months later, it is released into the Semi-Annual Enterprise Channel. Only one version is supported at a time, giving it a six month support window in the Preview Channel before the next version is released. Security and non-security updates are released (as needed) on the second Tuesday of the months in which it is serviced.

Within the first four (4) months of the Preview Channel, it is crucial for an enterprise to discover non-security issues to report to Microsoft. During this time, Microsoft will work to fix those issues before this version is released into the Semi-Annual Channel. Once released into the Semi-Annual Channel, the approval process for non-security fixes is even more stringent. 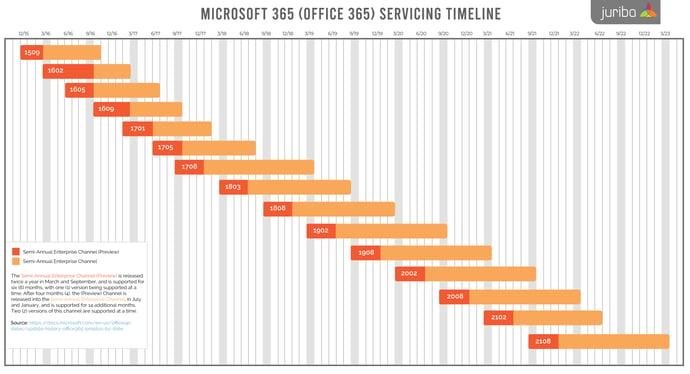 The Semi-Annual Enterprise Channel is the most stable and longest-serviced release from Microsoft. It is released with new or updated features on the second Tuesday of both January and July. This is the only time new features are released into this channel, and separate downloads for this channel aren't available.

However, for this channel, Microsoft tries to release as few non-security updates as possible. One reason is that most issues have been resolved based on customer feedback in the Preview version. Another reason is that enterprise customers have asked for a channel that doesn't update often, as new compliance testing might be needed with each update.

Microsoft recommends this channel for users that need extensive testing due to compliance issues with government or internal regulations. However, enterprises favor this channel due to other factors such as limited budget and resources to test and deploy new versions more often.

2020 saw significant changes to Office 365, from it being renamed Microsoft 365 to the changes and additions to its update channels. However, the cadence of updates is still faster than it has ever been in the past, especially when compared to an on-premise Office suite.

It is not feasible anymore for an IT department to do a big bang migration every few years. Instead, they have to do continuous updates throughout the year. Otherwise, they greatly risk running unsupported versions or experiencing conflicts with line-of-business critical applications. With the six different update channels and their respective update and support schedules, enterprises have more options than ever before to create a rollout plan that best suits them.

To support this new way of managing updates, you will need the right tooling that allows you to not only gain up-to-date, actionable insights into the readiness state and status of your assets, but to have a central command and control center as well. The ability to continuously improve in small iterations to keep you moving forward will be of paramount importance.

If you are planning a Microsoft 365 rollout within the next 12 months, or have already moved and want to learn how to efficiently manage your update cycles, schedule a consultation with me and I will walk you through how Juriba's IT Transformation platform, Dashworks, has helped ready more than ten million assets for migration and enables enterprises around the world to stay in control — and ahead — of their Microsoft 365, Windows-as-a-Service, and other Evergreen IT initiatives.