Internet Explorer 11 Goes End-Of-Life June 2022: What You Need To Know

Business users with systems that are even a few years old are ringing the warning bells. Microsoft announced on May 19th, 2021 that it will be phasing out its Internet Explorer browser entirely, and replacing it with Microsoft Edge, a newer and edgier (pun intended) version of the prominent traditional web browser, while also continuing to update the OS options available to customers.

This notification on IE 11 is big news for businesses that rely on systems using Internet Explorer as a standard. In fact, a Forrester 2021 survey of 40 enterprises on behalf of Microsoft showed that, on average, enterprises have 1,678 legacy applications running on Internet Explorer! It is also a wake-up call for businesses to move from a “box-license,” on-premise software purchase approach to Microsoft's new Office 365 offering (albeit less new now than it was a few years ago) which allows users to take advantage of dynamic cloud service models.

Users are being notified that Microsoft ended IE 11 support for Microsoft Teams on November 30th, 2020, and for Microsoft 365 and other Microsoft applications on August 17th, 2021. The company will end support of IE 11 for Windows 10 Operating Systems on June 15th of this year — and that's coming up very fast. There will be an extension, according to Microsoft, for Windows 10 LTSC and Windows 7 and Windows 8.1 systems, but that still leaves a lot of customers scrambling as they are “pushed off of the diving board”. Any time that legacy migration is driven by vendor EOL notifications, the business is under pressure, and this is no exception.

To better explain what is happening, Microsoft details some of the ways that things are changing in a resource that addresses its comprehensive life cycle policy for operating systems and components.

For example, a Microsoft FAQ states that “Internet Explorer is a component of the Windows operating system (OS) and follows the Life Cycle Policy for the product on which it is installed and supported.” The FAQ also reveals that the way MS is keeping some method of support for the IE legacy is in Microsoft Edge itself. Essentially, Edge will feature an “Explorer” mode that will contain the ability to use a legacy platform through a sort of built-in emulation. Microsoft says that the underlying MSHTML ‘Trident engine’ will still be supported through this aspect of Microsoft Edge. 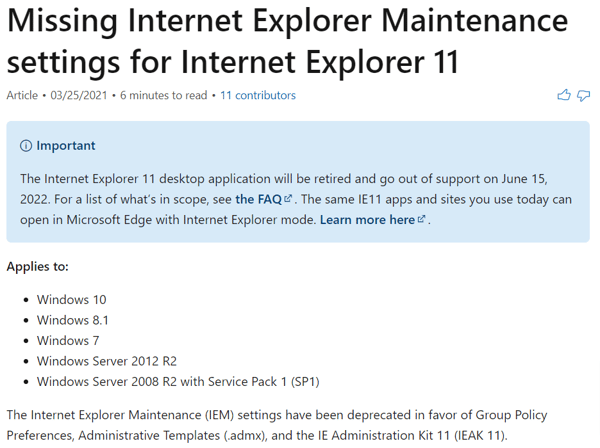 But be warned, because the IE mode will also sunset. Microsoft has promised to support it through 2029, and says the company will provide a 1-year warning, but that means that the Edge IE mode capability will not be there forever.

Another big question for some companies is how they are going to maintain systems with certain dependencies. After IE goes away, what do you do with systems that rely on IE runtime DLLs? This will certainly add to what traditional developers decades ago used to call “DLL hell,” the situation you find yourself in where library files and dependencies encounter changes that make your initial setup obsolete.

But that's just one aspect of how businesses need to prepare for change. There's a lot of change coming in terms of operating systems and how devices will run. Some of it is related to the Internet of Things (IoT) global connection model, and other aspects have to do with that ever-evolving slate of services from companies like Microsoft which continually deliver end-of-life notifications to users.

Many of our clients are moving towards a "Cloud First" strategy and, as part of that, are already upgrading a lot of their legacy systems as they go. This also allows companies to take advantage of the basic value proposition of cloud services — that by using a subscription model, you have a lot more flexibility and the ability to source things on demand. For example, an HR manager who deals with provisioning for onboarding and decommissioning systems for departed employees understands the value of this. So does a manager who needs to predict what the office is going to need this year and the next.

Most modern businesses run on data to some extent, so being able to move to a cloud model is very valuable to a lot of these operations. There’s so much change going on that it can be hard to keep on top of. On the other hand, when a company has successfully embraced the new models, certain efficiencies apply, and some of them are only really evident after the fact.

Basically speaking, it’s time for companies to get serious about using the newest tools and versions available. Admins can also employ automation to help with version control, licensing, and more. Take a look at the newest best practices around making automation work for your business!

What Is The Next Step?

It is also worth noting that while Internet Explorer 11 will become end-of-life and therefore subject to security support issues, the applications running on it will continue to work. Although, moving to Microsoft Edge might mean a significant re-coding and extensive testing of the application, moving to an alternative browser, such as Chrome or Firefox, might be a simpler option in the interim. The key, for now, will be for organizations to start getting their web app inventory (and associated controls – e.g. Java, Active X) organized so that they can begin to plan the transition of those to a modern browser in the medium-term future.